I grew up in a house with a musician but music was never a huge part of my life. My father played trumpet in a jazz band and I was always around musical people but I never really connected with music and it was never a real presence in my house. My parent’s would listen to the local pop radio station or, more likely, whatever station was playing the classics. I don’t really remember much other than maybe some stuff dad was working on for some of the shows he did but my musical experience for most of my life was pretty minimal. That probably explains why I don’t really connect with music today. With that in mind, it should come to no surprise that I never had any respect for The Beach Boys. It took about 40 years for that opinion to change.

Growing up I could probably recognize The Beach Boys songs just because those early, surf songs are part of our cultural consciousness. I can’t say I ever thought of the music as interesting or important. I was raised under the mythology of The Beatles. The narrative behind The Beatles is that they are the most influential rock band ever and that may be true. The Beach Boys were always that unoffensive music that is played between bands at the county festival or while playing musical chairs at school or things like that. What I remember of The Beach Boys was seeing them play a concert after a local AAA Baseball game back in the late 80s or early 90s. To me it was always outdated music from a different time. Certainly not anything of value for a kid coming of age in the time of “grunge”

By around 1995 I was well into my study of history in college. I had a professor that had done a lot of work in the history of sound and recording and during one of his classes he mentioned The Beach Boys and Pet Sounds and how that album in particular was extremely influential and important to the history of music. I didn’t understand that at all but I also didn’t forget it. I had never heard of Pet Sounds but I respected him enough to file the information away for later use. As time when on I started to pick up other bits of information that kept pointing back to this album as something special. I never actually bothered to listen to it but I began to realize there was a certain reverence for the album and it was especially strong with people who knew what they were talking about. Since I still didn’t really care about the guys that made “Kokomo” I just assumed it was old people pining away about the music of their youth but the idea that Pet Sounds was never completely forgotten. 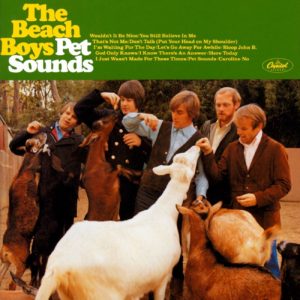 Cut to around 1998 and I started listening to Barenaked Ladies. Not exactly a titanic musical force but I found a bit of a geeky kindred spirit in some of their songs and they are a band that my wife and I both enjoy which is pretty rare in our relationship. It was then that I discovered their song “Brian Wilson”. This just added to the mystery of the myth of Brian Wilson that had been growing in my head since that time in college. The song inspired me to find out more about Wilson and I read about his life and his struggles and while that filled in some gaps for me I still never picked up Pet Sounds. I found out what I needed to know to understand the song and then continued on my way, always remembering what my history professor said about the album but never going so far as to seek it out.

Ten years later I started collecting comics again, which you can read about in another post, and soon after I began to listen to podcasts and, more specifically, comic book related podcasts. My favorite podcast even to this day was and is iFanboy. One of the hosts, Josh Flanagan, is a fan of the album and would mention it on occasion. I honestly don’t remember exactly when it came up on the show but there must have been a bit of a discussion of the album in the later months of 2015 or the early months of 2016 because it coincided with another event and that was Christmas of 2015. My wife is a big John Cusak fan and I have been buying her one of his movies every Christmas for most of our relationship. It is just a tradition and for Christmas 2015 I believe the film was Love and Mercy. To be honest, I didn’t know much about it but it was available on the shelf at Best Buy and it had Paul Dano. I really liked Dano in There Will Be Blood. The movie seemed like a good choice and it knocked one off of my list so I bought it. We watched the film a few days after Christmas and that is really when I started to understand what was going on with Pet Sounds. 20 years after my professor at UAB mentioned the album I finally took the opportunity to listen to it for the first time. Since then the album and, more specifically, the recording of the album has come to intrigue and fascinate me and I have been inspired to learn as much as I can about those recording sessions and the history of The Beach Boys.

After the film I found a video on Netflix about the session musicians that helped craft the sound of the album, and a lot of other music of the time. The Wrecking Crew story in itself is fascinating but how they embraced Wilson and what he was working to create is really the story of legend. Pet Sounds is a special album and Wilson is a genius but it never could have been realized without these guys.

I have kept up researching The Beach Boys and the history of the band is one hell of story. Particularly intriguing is what happened when Brian stopped touring and how we basically ended up with the music that Brian created and this weird nostalgia act made of of some of the remaining members. The Beach Boy story even has a classic “villian” in front-man(?) Mike Love. One one hand you have a genius musician, producer and composer who loses control of himself and is subject to the whims of the people around him and on the other you have friend, cousin and band-mate who desperately craves the attention and fame that Wilson’s genius brought to the rest of the band but doesn’t have any of the talent to make it happen for himself and resorts to legal wrangling to keep the brand image of the band alive. Riveting stuff even if you don’t appreciate the music.

Most recently I watched a two part documentary on Wilson and it really goes into depth on the history of the band and particularly Wilson’s songwriting prowess. Both parts are available on YouTube and the first is shown below.

So after all of this, do I like Pet Sounds? That is a tough one. To be honest, it really doesn’t do much for me on a pure enjoyment level. I have come to appreciate the craftsmanship and work that went into the recording. I have an understanding on how it influenced other bands like The Beatles and pushed more complex composition into the recording of Rock-and-Roll and popular music. I even really dig a few of the tracks. As a whole, however, it isn’t really for me. I can’t really articulate why and anything I say will do the album a disservice both because my understanding of music is fairly limited and history has already proven that it is one of the great albums of all time but it isn’t something I would ever long to hear. It would not be on my “desert island” list. Even still, I remain fascinated by the story of the making of Pet Sounds and the life of Brian Wilson. If you are kind of like I was 20 years ago and see The Beach Boys as a bubble gum boy band from the 60s then I really suggest you take some time and learn a little more. Start with Love and Mercy and continue your journey of discover from there. It is worth the trip.