So a lot happened in 2016 but there is no need to rehash any of that hot mess. It’s over and good riddance! On to better things. 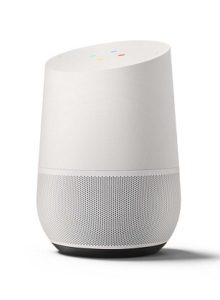 I picked up a Google Home with some Christmas money. This was totally an impulse buy and I knew when I clicked the “buy: button that I was ordering a toy. The thing is, everyone at work was getting one of these or an Amazon Echo and I just can’t be left behind when it comes to technology. Nope, can’t let that happen.

I chose the Google Home over the Echo for a couple of reasons. The main reason is that I am already invested in the Google environment. I use Gmail as my main email account. Google Calendar is my calendar of choice. Well, really it is my Exchange calendar at work but I have them integrated so if I ever had to give up my work account I would still have my Google Calendar. I use Android phones, we have Nexus devices in the house, and we have multiple Chromecast units. Staying within the Google environment seemed to make sense.

The other reason I went with the Google Home is more of a gamble. Amazon has a big headstart on Google and right now they have way more integrated services and apps. However, my bet is that Google will catch up quick and once it is all said and done, Google will outperform the Echo. What concerns me is that Amazon is making a pretty big play for the consumer with Amazon Prime and all of the services connected to Prime. If they can pull it all together and get the Echo working with multiple accounts then it could dominate the market. I am placing my bet on Google but I am fully willing to jump ships if the time arises. When it comes to the Internet of Things, IOT, Google certainly can be a major player IF they choose to dedicate their resources in that direction.

Here is a brief overview of the Google Home.

So, what am I using this for at the moment? Mostly I am using it to annoy my wife. I have set up some things with IFTTT.com that will get the Google Home to talk to me and then send my wife an email. For example, if I say “Hey Google, Jeff is awesome” then  the Google Home will respond “You damn right he is!” and then send my wife an email saying “Google Home just said Jeff is Awesome”. If I do this 15 times a day then she gets 15 emails. She hates that and I find it absolutely hilarious. Especially when I do it while she isn’t home. That email tells her exactly what I just did and I love it. I am still working on getting it to text her similar information but that integration is a bit wonky at the moment.

On the practical side, we are using this to play music in the kitchen as well as connect to castable applications like Pocket Casts for podcasts and YouTube for videos. It is also great for setting timers, getting information, and even checking on the news and weather before heading out for the day. In the future I hope to have some more Smart Home devices connected like a Nest thermostat. light switches, and security devices. I live in what basically amounts to a freestanding apartment so I don’t have a lot of things I need to wire up but being able to voice control porch lights and the temperature is kind of cool. I also expect other features to come along as the product matures.

I fully admit that Google Home is an adult toy and would have been something I would ask Santa for if I still did such a thing. It remains to be seen whether or not it will add any real value to my life but right now I am enjoying playing around with what it can do. If you have anything you want me to try, hit me up here or through any of the other social media outlets listed above.