At some point in 1987 I stopped acquiring comics. I can’t remember why exactly but I suspect it was due to lack of access and lack of funds. Plus, I was rocketing toward my teenage years and being “cool” became very important and comics during the 80s were certainly not cool. I don’t know if being a comic nerd is cool now but at least it is a bit more accepted.  In 1987, however, it was certainly not what the “cool kids” were into. It is worth noting that I was never “cool” but I damn sure tried and as I approached 13 I eschewed the passions of my younger years and dove all in to things like the NBA, rap music, and whatever else it seemed like the kids I wanted to emulate were into. I call this The Dark Times. By the time I hit high school the need to be accepted by any clique within my peers was fading but comics still were not something on my geek radar. At least not until I started to drive.

I earned my driver’s license in November 1991. In the summer of 1992 I kind of stumbled into a job as a lifeguard a few miles away from my house. I passed a little strip of stores and a gas station on the way to work every day and generally never paid any attention to them but one day I noticed a sign.  The sign, if my memory is correctly, had a picture of Superman and Batman and said ” The Comic Strip”. I still remembered those days as a kid when I desperately wanted to go to a comic book store but could never talk my parents into taking me. I think during my entire time being into comics during 1985-1987 we went to a store that had comics twice and those stores were more hobby shops and didn’t specialize in comics. Seeing the sign on the store touched something almost forgotten inside of me that always wanted to visit a real comic shop and one random day on the way home from work I pulled into the parking lot and went inside. 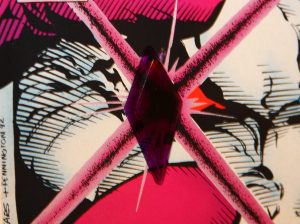 It was everything I wanted it to be. Nothing but comics floor to ceiling all around. No baseball cards, or hot rod model kits, just comics. Racks and boxes and boxes of comics. The store was small, hardly larger than the master bedroom of a decent sized house but I didn’t notice it at the time. it was the mecca the tween version of me never got to visit. I don’t know how long I stayed in the store but I remember it kind of like the finding the Holy Grail. The only thing that would have made the experience any better would have been church organ music playing in the background. After browsing for a few moments eventually something strange caught me eye. On the new release rack there was a book featuring a character that I didn’t recognize from DC. It also had a “Special” designation on the cover which reminded me of “Crisis on Infinite Earths” which was so important to me in the 80s. It also had something on the cover I had never seen before. There was a plastic diamond mounted on the cover. It was enough to get my to buy the book. I took my purchase and went on to work not realizing what those few minutes would do to my life for the next few years. 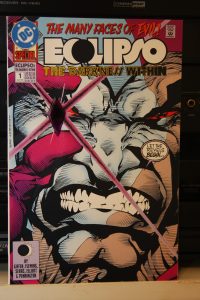 The book was “Eclipso: The Darkness Within” #1. It was the first part of a summer event that went through the DC annuals for that year. The book itself isn’t that notable although I still remember the event being better than other events I would read later. The important part is that it was my gateway back into comics in the 90s. The plastic jewel was indicative of the gimmick covers that would dominate the 90s and considering it got me to buy a comic which I hadn’t done for 5 years I guess the gimmick cover worked. The book and series basically had many heroes and villains getting “eclipsed” and it was up to the rest of the heroes to defeat Eclipso and turn their friends and others back into their normal selves before Eclipso took over everything.

After my initial stop at the comic shop I started going back and eventually I started a pull list with the store. That in itself was kind of amazing to me. The store would pull the books I wanted and all I had to due is come and pick them up AND they gave you a discount on the books! Yep, I signed up and it wasn’t long before I was going every week. I think maybe new comic day was Thursday back them but I can’t be sure about that. I know that my new job gave me disposable income and I found a new way to dispose of it. That single book purchase eventually ended up with me picking up sometimes 15 to 20 books a week. I still remember how I looked forward to hitting the store every week. It was so easy because it was literally on my way to work. I suspect if I never became a lifeguard I would be a very different person today. It is interesting how little things can change the course of one’s life.

The comic book industry would entire a legendary boom during the 90s and I was right in the middle of it. The cover gimmicks would grow and a new publisher would arise to shake up the industry. Shops would pop up all around Birmingham and I visited them all but “The Comic Strip” would remain my favorite until it was bought by its evil nemesis, “Lion and Unicorn” as the boom turned to bust. The 2nd Age of my comic collecting would end soon after but before that there is one more issue that we must discuss.

On the next Key Issues, the death of an American icon.