In the previous edition of this column I wrote about my first comic, Krull #2. At the time the column was called “Why I Love Comics” and I was never happy with that name and finally decided to use what I originally wanted to call the column which is “Key Issues”. My original idea was better and am not really sure why I chose to go a different way with the first column. Now that I am happier with the title it is time for the next installment!

In November 1985 my family moved to Alabama. I had just turned 10 and starting over in a new school wasn’t exactly easy. I was different. I liked basketball in a world where football was king. I had a Kentucky accent in the heart of Dixie and I came from an experiment school that didn’t have traditional classrooms. I went from a town where everyone knew my family and me to a town where I was a stranger and my family was seen as northerners (yeah, Kentucky is not “the north” but to people in Alabama it kind of is) who really didn’t belong. The good thing is that I found myself in with a group of kids like myself pretty quickly. One of them actually was another Kentucky transplant! So, I made a few friends quickly and then found out they were into comics. These guys were REALLY into them too.  They had stacks of issues they would bring to school and they knew the history of all the characters and everything! This was a world I was previously unaware of.  I, of course, loved TV shows like Batman and Super-Friends but I had no idea that there was so much more to the comic book universe. That is when I was introduced to a story called Crisis on Infinite Earths. 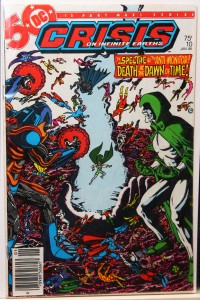 I don’t know if someone showed me this issue first or if I grabbed it one day while in the grocery story (I bought all my comics at the local FoodMax in the early days) because I recognized the title from other books the kids had but somehow this book ended up in my possession and it was awesome!  Crisis on Infinite Earths was a huge event in the DC Universe maybe the first real universe wide event ever in comics. It has certainly become the most important.

For a 10 year old boy who loved superheroes, however, all that matter is that this book had EVERY CHARACTER EVER! Well, not actually but close enough! Not only did it have Superman and Batman it had multiple versions of each character!  WHAAAATTTT??? This was my first introduction to the idea of the multiverse and it honestly blew my mind. My favorite cartoon as a kid was Super-Friends and this book was everything I loved about Super-Friends but way better in every way. literally this book had hundreds of characters, many I had never heard of before and they were all fighting against this huge universe ending threat. Even the villains were in on the act! This book sold me on everything comics and I will point to it as being one of two things that made me a life long comic fan.  I will talk about the other book in the next entry in this series.

In many ways it is kind of lucky that I stumbled into comics during the Crisis event. This is a showcase of two creators doing some of their best work in a series that would become legendary. If I had jumped in with another book, something of lesser quality maybe I would have moved on but starting with Crisis created an experience that I have been chasing ever since because I know how good comics can be. Sometimes I read books that live up to that experience but most of the time they fall short. That isn’t a dig on modern comics but a statement on how great Crisis is. I was in the right place at the right time and hanging out with other kids who loved this stuff in a way I was only just discovering.

I devoured this issue and the two that came after. This was a time when getting back issues was really hard for a 10 year old and I didn’t read the entire 12 issue series until much, much later but I didn’t care. I had enough of the story in those three issues to sustain me for years. To this day I am still a major fan of The Spectre (he is the guy in the green cloak on the cover) and I have to assume my fandom is due, in part, to his part in the story and his major role in this issue and the story. After this event DC completely rebooted its universe and I got to be on the ground floor for all of the new things that came out of Crisis. I was introduced to The Flash who would also become a favorite character as well as John Byrne’s version of Superman which is still the Superman that I personally identify with. Comics would become part of my life for most of the next 30 years and I can point to this issue as being the catalyst.

What is also important here is that comics became something that allowed me to sort of fit in with this new world I was thrust into. Everything in Alabama was very different from what I was used to in Kentucky. The school was different, the people were different and I often felt alone and isolated. Comics helped me make friends and find a group of kids I felt comfortable being around. It was a little early yet for kids to start breaking off into cliques and reading comics wasn’t a “nerd” thing to do. That would come later but at the time it was exactly what I needed to start feeling better with my new reality.

Crisis #10 will always be a special book for me. That particular copy is pretty beat down. The cover is no longer attached and the pages are bent and dog eared BUT it is my original copy and it is still with me. The thing is though, comics are meant to be read not to be shoved into boxes and hidden away for some future, possible sale. The value in these things is the story and art contained inside. Yes, I have boxes of comics but every one of them has been read. Some are better than others but I am and always will be in this work they represent. It remains important to me to read comics and not “collect” them.

Come back for the next installment where we find out Who’s Who in the comics universe!