My wonderful wife and daughter bought LEGO Dimensions for me as a Christmas present. I have been playing it almost daily since Christmas morning. We have sampled most of the toy-to-game products including Skylanders and Disney Infinity and this is by far the most enjoyable experience I have had with games of this type. It should be known that we have played most of the LEGO games culminating most recently in LEGO Batman 3 which should have just been called LEGO Justice League. Emily and I both enjoy them and love their co-operative play. LEGO Dimensions, therefore, was right up our alley and it has delivered on every level. 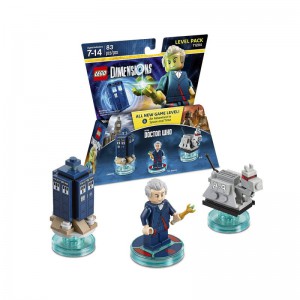 I want to especially note the Doctor Who level pack that Emily bought. It comes as pictured and once you play through the level as the 12th Doctor you “unlock” all of the other iterations of the character. In future levels when the Doctor “dies” he regenerates as the next doctor or, in the case of 12, he regenerates back to the first Doctor. You can also unlock the ability to change all of the in-game music to Doctor Who tracks.  It is a really excellent experience if you are a Who fan.

The other level pack that we have is the Portal level pack and it is equally well done. I never would have guessed that I would see GLaDOS rendered in LEGO form. All of the voice talent is there too including Stephen Merchant as Wheatley.  In fact, many of the franchises’ voices are on display within the game. You want Peter Capaldi?  You got Peter Capaldi! You want Christopher Lloyd as Doc Brown? Well my friend, you GOT Christopher Lloyd as Doc Brown.  Seriously, check out the cast listing! Some of it is from archive footage but a lot of new recordings were made as well.

The best thing about this game is that it is family friendly but there is a lot to be loved by the 40 year old geek like myself. Even my wife got a kick out of seeing Batman fight flying monkeys during the Wizard of Oz level. The downside of course is that to unlock all of the content you have to but a ton of stuff. The starter pack is a full game and you can get quite a bit of enjoyment out of it but it really shines when you add in other characters and open up their worlds and levels. Who doesn’t want to go tooling around Homer Simpson’s Springfield or spend time inside the TARDIS? If you like the LEGO games this will seems similar but the portal and the interactivity add an extra…Dimension…(Get it) to to formula. There are hours of game time in here so the value is there. You will pay more for this game than say Disney Infinity but I think you also get a much more enjoyable product. It gets my two thumbs up!

What I really want no is a full LEGO Doctor Who stand alone game. That would be wizard!