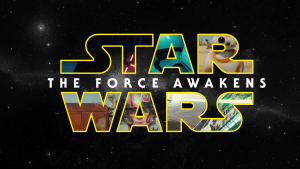 Is there a better way to start 2016 than with a second viewing of Star Wars – The Force Awakens? I suggest that there is not! It is a really wonderful thing to share my love of Star Wars with my family and actually see them enjoy it. This was not the case with those “other” Star Wars movies. I am glad to have a second shot at it in my lifetime.

Emily went with me today and after the film she was really geeking out with me about all of the fan theories regarding Rey’s parentage, Luke’s missing years, and Emo Kylo Ren. In many ways watching her dive into the Star Wars universe and have fun with it like I used to is the best part of the whole thing. She has grown up with Star Wars all around her but never connected with any of it until this most recent film. I think if I could give J.J. Abrams a hug I would. He has been able to bring back all the good feelings that the prequels appeared to have destroyed. Those of us that grew up loving the original trilogy finally have something they can point to and say “This is what we have been talking about for over 30 years.” I don’t know if Emily will ever come to love this new Star Wars like I loved the old one but I know she will have the memory of experiencing it with her dad and that puts a smile on my face.

I don’t feel the need to review the film. If you want to read reviews there are plenty out there. Nothing I say can add anything new to that discussion. On a personal level, however, I can say that it works for me. Nothing is ever perfect but I can’t point to anything and really say “I wish they didn’t do that” or “This doesn’t belong in a Star Wars movie.” Again, I can not say the same thing for the prequels. The simplest yet most powerful praise I can ever give to a film is wanting to see it again as soon as the credits roll. I have seen this one twice now and I am ready to go again.

What are the show times for tomorrow?