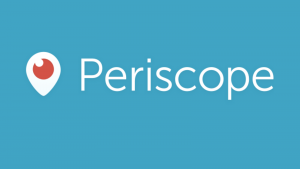 Along with YouTube, another obsession in my house has been Periscope. If you haven’t already given this service a whirl, I highly recommend it. Periscope is a video broadcast service connected to Twitter.  Simply put, it allows you to broadcast video from your smart phone or other video enabled device to your Twitter followers.  Well, at least those that are also running Periscope anyway. They can type messages to you and stroke your ego a bit by giving your broadcast “hearts” by taping on the screen. You are able to talk back to those users and respond to the comment stream that comes up on your screen. Typing comments back would be difficult and honestly I don’t know if that functionality exists but I can’t come up with a reason to want to do that while you are broadcasting.

I like this service for a couple of reasons. First, it is live. YouTube gets a lot of press and it does allow live streaming but it is a bit clunky to use on the fly. That is the second thing I like about Periscope.  It is dead simple to use. A couple of clicks and you are broadcasting.  I also like you it is connected to Twitter. You have the options of connecting to all of your connections when you start up the app but I chose not to at first.  If you DO chose to add those you follow to Periscope you can be overwhelmed with broadcast notifications. I chose to add people manually and it has worked out a little better.  The nice thing, however, is if one of you Twitter followers installs Periscope and starts their first broadcast then you will get a notification (if you haven’t turned notifications off). This allows you to add someone once they are using Periscope. It keeps the following list manageable.

I see services like this becoming larger parts of our lives in both what we allow the world to see of our lives but also what we see of the world.  My wife loves watching this rice farmer in Asia broadcast what he is doing out in the field. There are broadcasts from all over the world going on right now and I find that pretty cool. Sometimes finding something interesting can be a bit of a trick though. Narcissism plays a big part in Periscope and most people are not worth watching but the good stuff is out there if you keep looking.