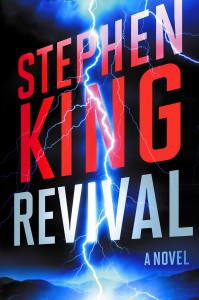 Those that know me at all know that I have been a Stephen King fan since I started reading “adult” novels. I remember my mom borrowing them from a library and I guess I picked up on the buzz surrounding his work during those early years. Eventually my mom even had a few of his books on the shelf at home. I vividly remember reading her copies of The Dead Zone and Firestarter to this very day. Reading those books was like watching an R rated movie when you were too you to really be doing so.  There was something forbidden and dangerous about it and that made it all the more interesting and exciting. Of course my parents never really censored books from my so I wasn’t doing anything off-limits but it still felt like it. I was hooked from the very first book I read and I have been hooked ever since.

I have to admit that I haven’t been as enamored with King’s work the last few years. I have spoken often about the change in his writing after his accident. His mastery of the craft has not changed but the stories just don’t have the same punch as what I remember from those early works. I will certainly admit that we are both older and that may influence both his writing and my experience reading his writing but I still argue that he has softened over time. The other thing of note is that those early books, the ones that really put him on the map, were written under a cloud of addiction. King overcame alcohol and drug addiction during his career and while this admirable and I am really glad he is still around there is no denying that mind altering substances can enhance the creative process. Whether it is age, the accident, sobriety, or just the well starting to run dry, King’s work doesn’t strike me in the same way it once did. There are always flashes of the old King in his more recent work but nothing every comes together quite like Pet Sematary or IT. At least not for me anyway and Revival is no different.

Revival is about a young boy who crosses paths with a minister that has come to his town to take over the local church. Reverend Jacobs is also fairly young but is married with a child and seems to have a very content life. It is a life, however, that hides a mystery and a very peculiar hobby.  The boy, Jamie Morton, encounters the Reverend Jacobs at several points throughout his life and although Jacobs helps Jamie out of a very serious situation the price that Jamie has to pay is very unexpected. It seems the Reverend might be messing around with things that aren’t exactly in the bible.

I figure that is enough of a plot outline to get you interested.  What I really want to talk about is my thoughts on the book after I finished it.  There will likely be spoilers scattered about from this point on so be aware.  I won’t warn you again.

I liked the book. I looked forward to reading it every day. Jamie is an interesting character even if he is all too familiar to King’s “constant readers”. What is regretful here is that Charles Jacobs is the more interesting character and way too little of him is seen in the book. He pops up that the critical points and then all but disappears. While I expect King intends Jacobs to be mostly a cipher I really would have like a little more with him. In fact, that is what I think this book is missing. There isn’t enough of the antagonist so there isn’t enough tension or intense beats within the story. It is just a slow build to the climax which happens about 15 pages or so before the end of the book. It is over quickly and then you get that very King ending where even though the danger has passed, nothing is quite back to normal and the hero always has some kind of debt to repay. For me it was just a kind of tired end and one that I have read many times before in other forms. I had the same criticism of Doctor Sleep and this book follows much of that book’s structure. It is so disappointing. I desperately want to have those same experiences that I had with King when I was younger but nothing seems to deliver. Maybe the experience is different for people that have not read a lot of King’s work. I wonder.

I also want to address one specific problem I have with the book.  This is absolutely for those that have read the book and I would love to hear from anyone else on the subject. Jacobs is almost a sympathetic character. The kind of pain someone must go through losing their wife and child like he did must be almost too much to bear. Jacobs’s decent into obsession is understandable but there is something that King leaves out and it is bugging me. He clearly cured Con’s condition with the “secret electricity” at the beginning of the book. That is the only explanation of Con’s behavior at the end. Given that this is true then Jacobs had already acquired some of this hidden knowledge BEFORE he came to Harlow. How did he come by this knowledge? What inspired his experiments with this knowledge BEFORE his family was taken from him? I want to know more about how he ended up with this knowledge. If he was messing around with this stuff from a young age then it is harder to see him as sympathetic. This is the root of my disappointment with the book. Jacobs is the interesting character, not Jaime. I think if this had been written in King’s early career we would know more about what Jacobs was up to prior to meeting the Morton’s. It is frustrating to see threads of things that would have been very interesting but were never fully developed.

Negatives aside, I still enjoyed the book. I always enjoy King’s books, even the bad ones and this isn’t a bad one.  Not to me. I just think way too much potentially interesting stuff was left out.  That and the quick way things ended. I wanted something deeper and I didn’t get it. Oh well, it was still a good read and I certainly would recommend it. I am admittedly a harsh critic of King. I think the biggest fans of any creator tend to be the hardest on what they create. High expectations and all of that. I have two more King books on my shelf and there are 3 or 4 more out there that I don’t own. I still plan on getting to them eventually. Once a constant reader, always a constant reader.