We got out of the house on Saturday to FINALLY check out the Ruffner Mountain Nature Preserve.  We have tried on other occasions to visit this park but it seems like something always got int the way.  We tend to get out on Sunday’s more than Saturday’s and the park doesn’t open until 1:00 on Sundays and I think that is what has stymied us in the past.  No problem this time though as we got out of the house mid-morning on a Saturday. 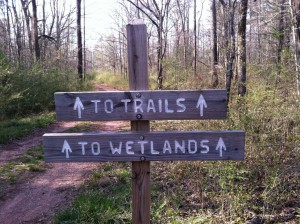 Ruffner Mountain is situated right in the middle of east Birmingham.  In fact, getting there is a little off-putting because you can’t imagine a nature preserve being so close to home and neighborhoods.  Once we got there, however, we were really surprised at how much area was available.  We first explored the nature center which has a few animals which have been rescued in the area.  Then we took off on the trails.  I found one particular bit of history quite fascinating.  At one time the area was being developed as a tourist destination.  A large cistern was built for swimming and quite a bit of sidewalk was poured but then the Great Depression hit and the development ceased and most of the project was left unfinished.  Most of the area, however, was used for mining and you can see some of that history along the many trails at the park.

Since we had not come prepared to go for a long hike, we left after a few hours with the hopes to return and explore some of the longer and more difficult trails at a later date.  I am especially interested in hiking the Quarry Trail which promises both a beautiful overlook of Birmingham and possibly the chance to spot fossils from a period of time when Birmingham was underwater.

As someone who has explored Oak Mountain State Park for years, this was a nice change of pace.  We got to see some different landscape and learn a little about the history of Birmingham.  I think it is a park we will certainly visit again.