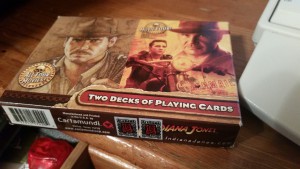 I noticed something today while sitting at my desk at the house.  I have a drawer that contains a few decks of playing cards.  These decks don’t really ever get played with but are just branded merchandise I picked up because I thought they were interesting for some reason.  For no particular reason I was looking at the decks pictured at the right and realized that the box had two stamps on the bottom.  For some reason I thought that the playing card tax had disappeared but clearly it has not.  Alabama is a land of weird taxes and this is just one of them.  As I found out after doing a little research, not only does the the seller of the cards have to pay a $0.10 tax on every pack of cards but they also have to pay a $2.00 license on the cards.  THEN there is the sales tax when the cards are purchased and in some places in Alabama that tax is 10%.

I wonder if this is one those old laws that comes from a time when gambling was even more discouraged than it is today.  The strange part is that this tax only applies to packs of cards with 54 or less cards per pack.  That means other card games like UNO which have more cards are not taxed.  Clearly this law is directly at your standard 52 card playing deck with 2 jokers.  It does make me wonder why card manufacturers just don’t throw in an extra joker per pack and avoid the tax all together.  Just another place in the Alabama law book that just doesn’t make sense in the modern world.  Of course it is Alabama so I don’t know why it should even be surprising. 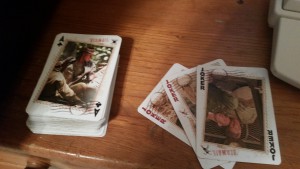 Hmmm, oddly enough right after I typed that paragraph I pulled out one of the decks in that pack and sure enough it has three jokers.  Guess that trick around the law doesn’t work for some reason.  From personal experience I know that the State of Alabama doesn’t screw around when it comes to tax dollars.  If anyone knows more about this tax please leave some notes in the comments.  I would love to hear about it!