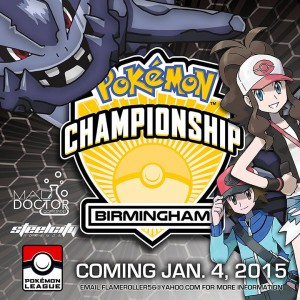 Emily started playing Pokémon earlier this year.  A friend of hers was kind of into collecting the cards but Emily really seemed to be interested in playing the game.  Since she is an only child this meant that I too had to get familiar with the game.  I was never into collectible card games, CCGs, but I have been aware of their existence.  Mostly I was slightly familiar with Magic: The Gathering but I was also aware of Pokémon although I think it hit big after I was a little out of its target age range.

What I have found is that Pokémon and really any CCG is a rabbit hole that can suck one in fairly quickly. The amount of product available for players really surprised me as well as the organization that exists for players that are especially interested in the game.  There is an international community surrounding the property with all kinds of tournaments and local leagues to help players practice their skills.  I did not expect this level of organization when Emily first mentioned that she was interested in Pokémon.  I expected her to buy some cards and maybe play some games with her friends and I but what has happened is that she has become immersed in both the story of Pokémon and the game surrounding it.  She has also recently picked up playing the video game as well.  Yes, the rabbit whole continues to get bigger.

Emily has played in many league games at this point and even played in a league challenge event but this will be the first big-time tournament in which she will play.  I have taken a cursory glance at deck building strategies and play techniques and what I have learned is that the game is way deeper than I expected and it really takes some time, study, and testing to really get good at playing and to understand how your deck works within your play strategy.  I think she is going to get killed tomorrow but being her first real tournament I hope she learns some things.  Mostly though I hope she has fun.  I realize that the Pokémon organization exists to sell cards, video games, and merchandise but I am also excited to see that there is a place where kids can compete that is open and welcoming.  I have also found that Pokémon isn’t gender specific.  Emily has played with and against as many girls as she has boys.  This game is fun for all and, dare I say, fun for adults too.  I am not playing in the tournament tomorrow but I considered it and I think it would have been fun.

So, if your kids are looking for a fun activity, maybe look into Pokémon.  It is more than just an annoying cartoon!