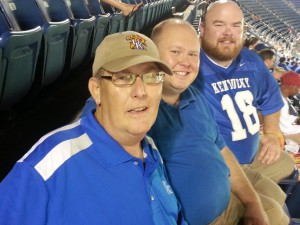 The Moore Boys at a Football Game

My Dad, Ronald R. Moore, passed away peacefully last Wednesday, April 30, 2014 after a year long fight with cancer.  It has only been one week since he passed and three days since his funeral.  I miss him a great deal already.

This is what I said about my father at his funeral.  I want to post it here as my personal memorial to my dad and to let everyone know what a good father he was to me.

I became a father in October 2003.  Not long after Emily was born, I started to wonder what legacy I would leave for my daughter.  I knew early on that it would not be wealth, prestige, status, or any of the things often associated with the word “legacy”.  It concerned me for a time that my perceived inability to leave a worthwhile legacy to Emily would define me as a failure of a father.  That insecurity has followed me for over ten years.

We learned of my father’s illness almost exactly a year ago.  At the time it was devastating.  My father was always the person I went to when I had a question.  It didn’t matter if it was about filing my taxes, buying a house, mitering some trim for my house, choosing the right color of plastic worm for a particular fishing trip or any number of things I wasn’t prepared to handle as an adult.  Dad was just always the person I looked to for answers and the idea of him not being around was inconceivable.  I wondered who was going to give me advice about getting Emily ready for high school and especially college or whatever she decided to do as she grew up.  The role model I had for being a father wouldn’t be there when I really needed him.  It was while struggling with my fears of losing dad when I figured out those concerns about my legacy.  The most valuable thing I could leave to my daughter would be what my father had left to me.

Ronald Moore, or “Dad” as I knew him, became a father in November 1975.  For the next 38 years he lived for his family.  Not long after my brother was born he left a job I think he loved as a teacher and band leader to work for the phone company.  He didn’t do it because he wanted a nicer car or to take vacations to the beach, he did it because he needed to provide for his family.  In 1985 he made an even harder choice to leave the town where he grew up, the town where everyone knew his name and where he had friends on every street corner.  I am sure it wasn’t easy for him.  He would be leaving his mother and father, siblings, and countless others he had known his entire life.  I asked him once why he moved us so far away and he told me because it was an opportunity to do things for us; mom, my brother and I, which he hadn’t been able to do before.  I know now that he sacrificed a part of his heart to do what he thought best for us.

Thinking about my father and all that he did for us really helps me understand the person that he was and what was important to him.  He never failed to be there for his family.  If we needed a soccer coach and no one else stepped up to volunteer, dad was there.  When the scouts needed another driver to get everyone to camp, dad was there.  When the band needed someone to organize a performance, dad was there.  So much of my life comes down to “dad was there”.  He was never overbearing and he never hovered but when he was needed, dad was there.  I didn’t come to appreciate what that meant until I became a father myself.

It wasn’t long until Emily asked to play basketball.  I signed her up and I remember filling out the form that asked if I would be willing to volunteer.  Of course I checked “yes” thinking that I would be happy to be an assistant.  I never thought I would have to be the coach because what did I know about coaching?  Not much I assure you.  Not long after signing up there was a parents’ meeting where the teams would be announced.  I went to the meeting and that is where I found out that I had been assigned a team to coach.  My first thought was to say “no”.  To explain they had the wrong guy.  I would love to be an assistant, but a coach?  That wasn’t me.  I thought of my father then and wondered what he would do.  Of course he would say yes.  No matter what, when someone needed him, especially his sons, dad was always “there”.

I realize today that the legacy I will leave to my daughter if I am at all successful as a father is for her to be able to say I too “was there”.   The most important thing my dad taught me and was still teaching me even up to the day he died was that when it comes to family and the people that matter most in your life you must first and foremost always “be there”.  I got to speak to dad the Monday before he went into the hospital for the last time.  Even then, when it was obvious that he wasn’t doing well and everyone around him knew he should not travel, he insisted that he would be coming down to see both his granddaughters as they had special events in their lives on the horizon.  My daughter, Emily, will be in a play this coming Saturday and dad wanted to be “there” to see and support her.  It was both his first and last lesson to me and it won’t be one I forget.

Mom asked me to read a poem to you today.  To be honest, at first I didn’t know how it fit in to what I wanted to say.  I thought it seemed a little random and out of place but now, after spending time think about my father and reminiscing about his life it makes perfect sense.  The poem is The Road Not Taken by Robert Frost.  I am sure many of you are familiar with it but let me take a moment to share it with everyone.

Two roads diverged in a yellow wood,
And sorry I could not travel both
And be one traveler, long I stood
And looked down one as far as I could
To where it bent in the undergrowth;

Then took the other, as just as fair,
And having perhaps the better claim,
Because it was grassy and wanted wear;
Though as for that the passing there
Had worn them really about the same,

And both that morning equally lay
In leaves no step had trodden black.
Oh, I kept the first for another day!
Yet knowing how way leads on to way,
I doubted if I should ever come back.

I shall be telling this with a sigh
Somewhere ages and ages hence:
Two roads diverged in a wood, and I—
I took the one less traveled by,
And that has made all the difference.

I know now how hard it is to choose to be there and actually do it.  There always seems to be something putting pressure on your time.  Dad chose the path less traveled.  He chose to put his family first and that isn’t an easy thing.

If I am truly lucky and if I do my job right maybe one day my daughter will proudly stand in front of a group of my friends and family and be able to say that, in the end, the most important thing about me is that I “was there”.   Dad was always there and looking back on his life it truly did make all the difference.