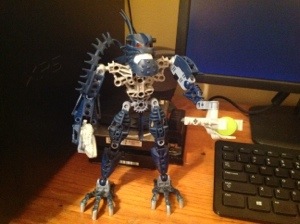 I bought this guy many years ago when Emily was just a small child.  It was purchased on a whim.  I thought it looked cool and it had a package that showcased its glowing eyes.  I didn’t know anything about Bionicle and I didn’t have any idea it was made by LEGO.  I built it that afternoon and it has been haunting my work area ever since.

Since that time Emily and I have worked on several small LEGO sets.  We have even dabbled in LEGO animation.  Nothing special and nothing really worth sharing other than among ourselves but each project has been a fun experience where we both learn a little about working together and being creative.  Although we don’t get to build very often, LEGOs are crazy expensive, it is an activity we have come to share as father and daughter.  Pretty cool I think.

The odd thing is, I never played with LEGOs as a kid and I can’t remember ever wanting to.  My brother had a few things but there was never any real LEGO presence in our house like there is in other homes with boys around.  I think we were more into action figures, Star Wars, He-Man, GI-Joe and the like.  At almost 40 years old, however, I enjoy those little colored blocks a great deal.  We even play the LEGO video games.  I think there is just something cool about building a thing with your own hands however you do it.  Either that or it is another symptom of my own arrested development problem.

Today and Sunday there is a BrickFair convention at the BJCC.  We have been looking forward to it for months.  We don’t buy anything there but just looking at the displays and discovering what other people can do with LEGOs makes for a great day.  I’ll post photos on my Twitter feed so keep an eye on that if you are interested.  I suppose they will also show up on Facebook.  Sometimes I have had weird issues with that working.

And if you see me there, say hello.  I might run away screaming but then again, I might not.