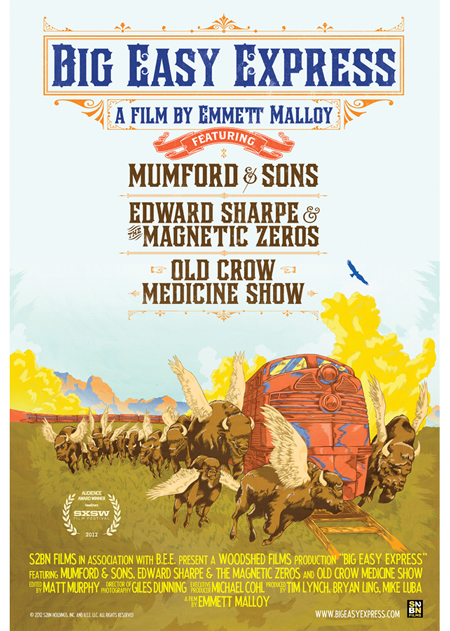 After watching Sound City ON Saturday I decided it was going to be an all music day on Sunday culminating in, of course, The Grammy’s.  The night before I had noticed that a couple of momentariness / concert films that I was interested in and set the DVR.  The first of these was The Big Easy Express.

The Big Easy Express follow three modern folk/rock bands on the Railroad Revival Tour in 2011.  The bands traveled from Oakland, California to New Orleans, Louisiana playing stops along the way.  The film consists mostly of concert footage with a little big of train life sprinkled in between.  It went on to win a Grammy for best Long Form Music Video the same night I watched it.  Well, I guess actually it would have received the award in a separate ceremony as those awards never make it to the broadcast show.

Its strange, I would not consider myself someone who typically likes folk or bluegrass and certainly not full-blown country but over the past few years this kind of sound has been growing on me.  I first took notice of Mumford & Sons when they played The Grammy’s with The Avett Brothers and Bob Dylan in 2011.  In particular their song “The Cave” stuck with me and I became an instant fan.  I later started listening to The Avett Brothers.  It was good music when I was feeling kind of relaxed and I enjoy both bands very much.  I still wouldn’t consider myself of folk music guy but I am coming around.  I saw the trailer for this film not too long after I got into Mumford and Sons and was excited to see it.  Of course nothing like that plays around here so eventually I kind of forgot about it.  I spotted it in the listings yesterday, set a timer, and got up this morning early specifically to watch it.

I enjoyed the film.  it was certainly not a behind-the-scenes type of thing with interviews about how the tour was pulled off or anything.  I think the idea that it is a long form music video is fairly apt.  There are plenty of vignettes of each band and wonderful music throughout.  I think what I was most interested in, however, are the sections on the train.  This is where the different band members mix it up and play with each other.  They worked on a few songs, had a few drinks and generally seemed to have a good time.  How awesome would it be to take a cross country trip with a bunch of your friends and just hang out playing music all day?  They mentioned not showing very often though.  I guess I am a guy who likes a shower ever day but other than that, count me in.  Otherwise, this is probably one of those films that if you like the music you will love the film but if you don’t like that genre then this isn’t going to be your thing either.  It looks good, sounds good and is an entertaining watch.

I followed this up with more Mumford & Sons because that just happened to be the next thing on the same channel.  I guess I kind of got lucky that way.  The Road to Red Rocks was released right around the time of their second album, “Babel” and is your basic concert style film with stuff from the band interspersed throughout the film.  I enjoyed this as well, maybe more than Big Easy Express.  I am sure that had to do with me being familiar with the music.  Again, if you are a Mumford & Sons fan then this is certainly worth watching.  Red Rocks looks like an awesome place to see a show by the way.  I’ve never seen a venue quite like it.

Later that evening Mumford & Sons played on The Grammys again and won Album of the Year.  It was a great way to end the evening.

On a side note, this was also the second time I saw The Lumineers play on TV as they had been on SNL a few weeks earlier.  “Ho Hey” has quickly become a song I can’t get enough of.  Sometimes I find it strange to have this growing affinity for folk/bluegrass.  I suppose age has something to do with it but I wonder if for much of my life I didn’t allow myself to listen to this kind of music.  As though it wasn’t “cool” or something.  I don’t know.  I like what I like.  That’s really all that matters isn’t it?