I have had the opportunity to work the Alabama State of the State Address for the last two years.  Today was the 2013 edition.  Below is a camera phone picture I took before the address took place. 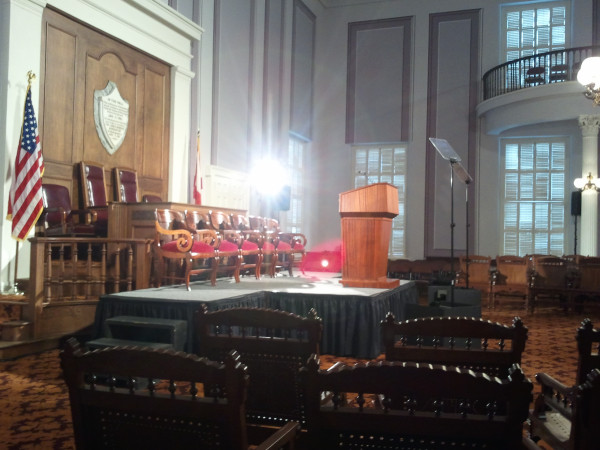 I have run audio for the address the last two years which gives me a level of access to the event that most people will never experience.  In a way it is kind of cool even if the work is relatively routine.  the address is given in the Capitol Rotunda or, more precisely, a room right off of the rotunda.  This part of the building is mostly for tourists these days and is not generally used for governmental work but I guess tradition keeps the annual address in this room.

I find a lot of things interesting about the whole thing.  Firstly, the plaque behind the makeshift stage and podium commemorates Alabama’s secession from the union. 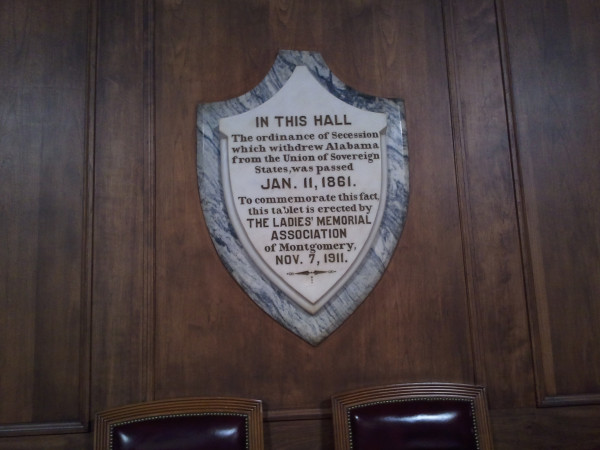 I think giving the State of the State address with this prominently in the background is probably a subtle message.  I’ll let you decide what that message might be.

I was also told by someone who works in the building that the Confederate flag is normally in this room but has been removed for the last few State of the State addresses.  Considering that this is mostly a museum and that historical accuracy is preserved, I am not surprised that the flag is around.  I was surprised to find out that it had been displayed during the address until recently.  I say “surprised” but that might be the wrong word.  Nothing much surprises me about this state any more.  Maybe I should say that it was a curious fact.

There were other things of note today.  The room was swept by bomb dogs that  previously saw service in Afghanistan.  The broadcast was not shown in HD which I found surprising.  The chairs in the first picture are replicates that cost $2,000 each and really were not made to be used.  At least ten have been broken to the tune of $20,000 of losses.  Even at a serious event like this, someone ALWAYS forgets to turn off their phone and it rings during the speech.  There is a big show of security but doing something nefarious really wouldn’t be that hard if you know what you are doing.  I had to move my vehicle three different times but it never left a thirty square foot area.  And finally, police sirens can be quite unnerving when someone turns them on behind you and you aren’t expecting it.

I find the workings of government infinitely fascinating and this is one event that I thing I will look forward to every year I get to do it.  Even if I don’t always agree with what is being said.