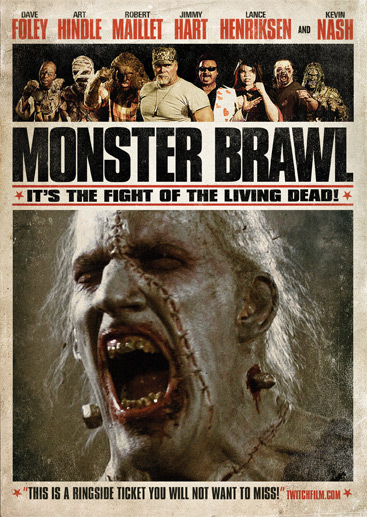 I watch a lot of bad movies.  Some are bad because they are cheaply produced, some are poorly acted, some are poorly directed, and many are just poorly written.  Then there are the movies that just should not exist.  These are the ones that have all of those previously listed characteristics as well as a few more. I don’t find many films I put into this list but I found one last night.  That film is Monster Brawl.

You don’t need any more information than what is in the title.  Monster Brawl is a “movie” about monsters wrestling.  Think WrestleMania for the horrific and undead and you have the idea.  Is there more to it than that?  NO.  I told you it was WrestleMania for monsters and that is it Jack!  That is all there is.  It is so much like WrestleMania that it even has Jimmy Hart.  I know some of you will have no idea what I am talking about but that’s OK because there is no way you are going to watch this right?

The movie opens with a voice over from the man who never turns down a job, Lance Henriksen.  I guess they needed a genre name to give the film some credibility but this film is bad by even Uwe Boll standards.  We get a basic rundown of the fight card which includes two divisions, monsters and the undead.  You know, because if you are going to have a wrestling event with monsters then you really should separate them like that.  Totally makes sense.  Then, the crazy of crazy happens.  Dave Foley shows up.  Yes kiddos, THAT DAVE FOLEY!  He comes on as the announcer for the brawl.  WHAT THE HELL?  Is this the same guy from The Kids in the Hall and Pixar’s A Bug’s Life?  The same Dave Foley from the severely underrated NewsRadio? Yes Sir!  Same guy!  I have no idea how he got conned into this but there he is phoning it in.  Guess Dave’s gotta eat right?

From here on there are some people from the wrestling world I don’t recognize and some really crappy monsters.  I guess they fight and stuff.  I don’t know.  I stopped watching after about ten minutes.  Do you know how shitty a movie has to be to get me to stop watching it?  Pretty Shitty.  No, I would even say I can sit through pretty shitty films.  It has to be Extremely Shitty for me just to throw up my hands and move on to something else.  I have sat through the entirety of both The Human Centipede and Barbie & The Diamond Castle!  This movie has both of those beat on the Shitty-O-Meter (patent pending) by several orders of magnitude.

The film is nostalgic for the 80s but in a really bad way.  It looks like the old Saturday Morning WWF show but with even worse writing and and a zombie.  Maybe it gets better.  I don’t know and don’t care.  If I decide I want to watch a wrestling parody I will dig up some old episodes of Celebrity Deathmatch.  At least there would be some humor as well as better special effects.  Keep in mind, Celebrity Deathmatch was claymation.  Gives you an idea about how special the special effects are in Monster Brawl eh?  Oh, and if you want to see an actual GOOD movie where classic monsters get together and mix it up then I highly recommend The Mosnter Squad.  Just whatever your do, don’t go for Monster Brawl.

Watch at your own risk.