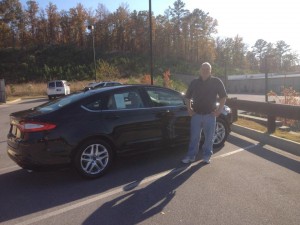 I bought a new car a few months back.  I haven’t said much about it here on purpose.  I didn’t want to be that guy who goes on and on about getting a new car.  I just wanted to buy it and move on.  That’s what I did.  If you are interested, it is a 2013 Ford Fusion. That picture to the left is the only picture I took when it was new.  You can see that the sticker is still in the window.

I have never owned a new car.  In fact, prior to this I had been driving the same truck for about 15 years.  My wife drove it for part of the time but I had been driving it since my daughter was born or about 9 years straight.  I suffered through summers with no AC which really wore me out and made me grumpy and tired on days where I had to sit in traffic for hours. Once our family van was paid off, I decided it was time for me to get something for myself.  Last summer was extra miserable due to record heat and I was determined not to go through that again.  After thinking about it for a while I decided to buy new car instead of used.  The main reason is that I keep my cars for a long time and I felt a new car would allow me to have a longer period without extremely expensive maintenance costs and that I should be able to drive the car longer.

I knew I wanted a Ford.  I felt that they handled the bailout well even if they did receive some government help.  I also knew that they have been building in some really great technology into their vehicles and of all the US based automakers Ford seemed to be the most innovative.  So, once committing to Ford I looked at the Focus (clearly too small for me), the Fusion, and the Taurus.  I probably would have preferred the Taurus but it was out of my budget.  I also briefly flirted with their bigger vehicles like the Escape and the Edge but gas mileage became an important factor.  I test drove the Fusion and was completely impressed.  The gas mileage was awesome for a pure internal combustion engine.  Not only did it have the features I wanted but I looked pretty darn good as well.  I won’t say Ford swiped the Aston Martin frond end but they do kind of look similar right?  Ultimately, I was looking for a car I could drive to work but would also be able to travel in as necessary.  I was sold.  Below is a look at the car.

Interesting note, the commercial above was filmed in and around Birmingham including at one of my favorite places, Barber Motorsports Park. 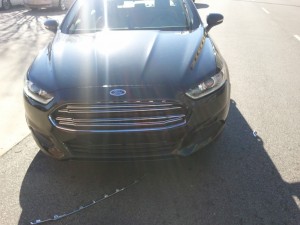 I  bought the car and only a few weeks later, I wrecked it.  Awesome right?  Not a big wreck but $2,000 worth of repairs.  It was unfortunate but that is kind of my luck and how my life goes.  You can’t really tell from the picture to the right but the front end had to be replaced.  I also found out at the time of the repair that Ford had issued a recall on the car and I would not be able to drive it for an indefinite period of time.  Apparently there was some concern over the whole thing catching on fire.  Again, just my luck.  I was given a rental car for about 3 weeks.  Eventually the car was ready, I paid my deductible, which was really convenient since it came out of our Christmas budget (no new bike for Emily this year), and took the car home.  Even though I had experienced some trouble, I was very happy to have my vehicle back in my possession.  Of course that is when the next problem started creeping in.  One that I find is not as easily fixable as a busted up bumper.

The seats in this vehicle are contoured on the sides.  The seat is flat across the back but concave.  I guess the idea is for the outside edges of the seat to wrap around your sides like a weak embrace.  That is, if your back is the right size to fit in the groove.  My back doesn’t.  I am a big guy.  Well, let’s call a spade a spade right?  A fat guy.  The edges of the seat sit behind my back.  This is supposed to be for lateral support.  For me all it does is induce pain.  Due to this, my back is killing me.  It hurts constantly and I am pretty sure it is because of this seat.  The are certainly some weight issues involved but the seat is at least contributing to the problem.  It is pretty disappointing to me.  I am not disappointed in the car as much as I am in the situation.  The funny thing is, out of all the reviews I read about this car the only negative thing I remember is this exact problem.  I remember reading something someone wrote that said bigger people might find the seats uncomfortable.  Too bad I read that review after I bought the car.

The pain I can deal with, at least to a point.  It is starting to affect my quality of life though.  It is yet another sign that I need to drop the pounds.  I get that and I continue to work toward a goal of lowering my weight although success has been fleeting.  What really depresses me is that this is going to be my experience with what will probably be the only brand new car I will every own.  All of the happiness I felt when I bought the car is shadowed by what is happening now.  I don’t look forward to driving anymore because I know I am going to be in pain.  It truly sucks.  I like the car.  I like it quite a bit.  It has most of the features I was looking for including AC and drive very well.  I guess the problem is me.  Too bad I didn’t take more time shopping.

Disappointment.  It’s What’s For Dinner…and for breakfast, lunch, and snack.