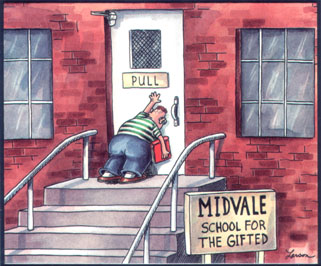 I continue to try and expose my daughter to stuff I loved as a child and stuff I still love today.  Recently I pulled out some of my The Far Side  books to see what she thought.  It has been a mixed bag.  Some of the humor she can’t get because she doesn’t understand the underlying concepts.  Gary Larson added a lot of science stuff into his cartoons.  Those she pretty much has to skip or ask me explain.  Even then it was hit or miss on whether she got the joke or not.  Others  were completely lost on her because they are based on technology she doesn’t understand because it isn’t used in her world.  Things like cameras with actual film or using an antenna to tune in a signal or phones that have rotary dials.  Just trying to explain exposure of chemical based film was a bit of a struggle.  She really didn’t understand how you can ruin a picture by opening the back of a camera.  Her experience is completely in the digital world.  My wife and I had to chuckle at these moments.  Otherwise the oppressive weight of time and change might have sent us into a spiral of depression.

Once we got past these issue it became a question of whether or not she “got” the joke.  It brought back memories of discussing these cartoons with other people trying to figure out what they meant.  The first book I have was published in 1982 so I would have been 7 at the time.  Younger than my daughter is now.  I wonder how many of them I completely got at that age.  The Far Side along with Calvin and Hobbes became something special and important to me growing up and I’m always a little sad that we don’t get any new work from Gary Larson or Bill Watterson.  It is also sad to think that there won’t be any new cartoonists of this variety as print continues to disappear.  Sure, there are plenty of web cartoons but few if any have the circulation/readership that The Far Side had at its peak.  What will we miss in the new age of publishing?

I hope she remains interested in these books.  There is so much great stuff out there that is slowly being forgotten.  I will do my part to see that it lives on.  What are you doing to spread the good news of great cartoons?