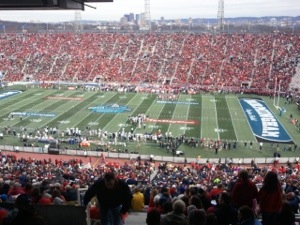 I was at the BBVA Compass Bowl today at Legion Field. The crowd was fantastic but Legion Field was woefully under prepared for the numbers of people. Traffic control was atrocious, I noticed many concession stands were sold out of basics like water well before the end of the 3rd quarter, and many members of the media were less than complementary of the facilities. I overheard a lot of this while I was working and it was hard to listen to. Birmingham really needs this event to be successful and I know the community can do better but it seems we just can’t pull it together. I hope the fans enjoyed themselves and all of the good they experienced outweighed any inconvenience. It really was a great event and pulled in an attendance greater than the Sugar Bowl. Almost 60,000 people in fact. To me those numbers clearly indicate that a bowl game in Birmingham is viable and can be a draw. Hopefully any problems encountered this year will provide an opportunity to make changes in the future.