So I did not make it a week on trying to post every day.  It just seems like time constantly gets away from me.  Meh, maybe I should just focus on writing “more” in general.  So, let’s move on. 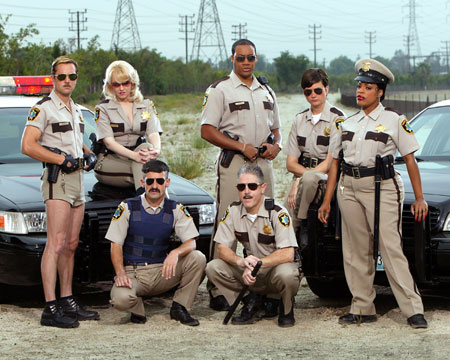 I was listening to the WTF podcast the other day and the guest for the episode was Jim Rash who plays Dean Pelton on Community.  During the interview, Marc and Jim talk about Reno 911.  It had been a few years since I watched the show but and I didn’t realize that Rash had a recurring cameo.  A few days later I listened to yet another episode and this time the guest was Kerri Kenney now new and improved as Kerri Kenney-Silver.  Kenney was one of the members of The State which, if you don’t know, is one of the funniest sketch shows ever to exist on TV.  Kenney also went on to star in Reno 911.  Well, after hearing the show mentioned in two consecutive episodes I realized I had to go back and watch it from the beginning.  I have a lot of memories of the show and always really enjoyed the cameos from former members of The State as well as guest roles by Patton Oswalt among others.  I punched the show into Netflix and sure enough it is available for instant streaming.  As of last week I started watching the show.

I have only watched a few of the episodes from season one but I am already really enjoying the project.  Thomas Lennon never disappoints and the rest of the cast is great in their roles as well.  One thing that is bothersome, however, is that some episodes are missing from Netflix streaming.  I am not sure why but my suspicion is that there are some music licensing issues on some episodes that are keeping them from being streamed.  Most of the series is there though so I am looking forward to completing the run.  I recommend the show quite strongly if you are looking for some really excellent comedic work in easy to digest 24 minute segments.

Keep an eye out for Jim Rash.  He doesn’t look anything like Dean Pelton although the character could DEFINITELY be related to our favorite dean.