I just got out of a free preview screening of Total Recall.  I am going to go into full detail in just a moment but I want to first say something extremely important.  Seriously, if you don’t read anything else, please read the next passage. 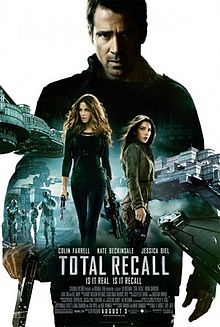 Don’t go to see Total Recall!  Don’t spend ANY money on this movie.  I know some of you out there like waiting for stuff to come to the dollar movie but even at dollar you are wasting your money.  Honestly, there is NOTHING worth seeing in this film.  I can say with full confidence if you go see this stinking turd burger you will be disappointed.  Don’t do it!  Don’t give Hollywood the idea that this is the kind of product we want from them.  Go see something else.  I think The Avengers is still playing and so is The Dark Knight Rises.  You know what, if you are even thinking of going to see Total Recall let me know and I will invite you over to my house, cook dinner, and screen any number of great movies for you free of charge.  I have a nice TV and Blu-Ray player.  It will be fun and I will happily open my home to you if it means you will not go see this steaming pile of diarrhea.  Are we clear on this point?  If not, please choose one of the ways to contact me that is listed in the upper right hand corner of this site and I will try to talk you down.  DON’T, DON’T, DON’T, DON’T GO SEE TOTAL RECALL!

And now, on with the show.

I received 2 passes to this movie through some kind of promotion with a movie news/review website thing.  I am not going to give out the site here because I am not really sure what the site is about.  I thought it might be a fun film to see given that I really like the original starring Arnold Schwarzenegger, Sharon Stone, and Michael Ironside.  I didn’t expect much and boy that is what I got, not much.  The movie started out with about 5 paragraphs of back story.  In this version of the story, chemical warfare has destroyed most of the habitable land on earth leaving Britian and Australia as the only sanctuaries for humanity.  Australia becomes “The Colony” where the working class lives while the middle and upper classes live in The United Federation of Britain.  These two points on the globe are connected by a massive tunnel that goes directly through the Earth’s Core.  The Colony workers travel through the tunnel, or The Drop as it is named in the film to the UFB to work, many of them building robots for the mechanical army used as a security force to keep the UFB safe from revolutionaries.  Pretty much everything else follows the story line of the original movie.  The Colony is a substitute for Mars and the habitable land mass is the analog to the oxygen crisis.  Now, let’s look at why this movie is awful.

First off, throw logic completely out the window.  The same science that could develop chemical weapons that destroy most of the earth is used to build a tunnel five football fields wide through the Earth’s core?  Forgetting how ridiculous that idea is, why the hell could they not clean up the mess?  Do you realize how much engineering it would take to build a subway through the center of the Earth?  Surely they could have come up with a way to fix the chemical damage right?

From what is shown in the film ALL of the habitable land is covered with massive skyscrapers or slums built on top of slums.  What do these people eat?  I don’t think I saw a single plant the entire two house.  I don’t remember seeing anything alive other than humans for that matter.  Maybe I missed something.  I might have fallen asleep at one point.  Did they revert to feeding on Soylent Green?

The production design is crap in this movie.  It is all greys, blacks, whites and blues.  Nothing interesting to look at.  Everything was derivative of other movies.  Clearly they got their design cues from Blade Runner, The Fifth Element, Minority Report and even I Robot.  If you are interested in mega city future worlds, see one of those films, they are all better.  Even I Robot.

Even the fan service is crap.  If you remember the original film then you remember the three breasted mutant prostitute.  There are NO mutants in this film.  None.  No suggestion of mutants and no reason to believe mutants are part of this narrative.  So why would there be a three breasted prostitute?  There is no good reason but she is there.  Did she have cosmetic surgery?  Is there a big demand for three breasted women in post-apocalyptic society?  Is this something we should have today?  Seriously, this was just a stupid Easter egg that was just tossed in without any thought.

Here’s something else, right in the middle of the movie there is a whole ten minutes of what I can only describe as something straight out of Super Mario Bros.  The characters had to navigate through a three dimensional maze of of elevators moving in all all directions.  They should have been crushed dozens of times but were able to navigate the obstacles.  The super advanced robots couldn’t do it very well though.  Seems odd.  Then again they could not shoot worth a shit either.  Shouldn’t a security robot be a perfect shot?  Maybe they were made by Microsoft.

Acting wise I can’t understand why someone would cast people like Bryan Cranston and Bill Nighy and give them nothing to do.  The only thing interesting about the big, bad guy was his ridiculous blonde locks.  Bill Nighy had about 10 lines.  Go back and look at the original film and you will see how good the actors that portrayed Cohagan and Quato really were.  Oh, and if we are going to have the three breasted chick why the hell can we not have a little guy come out of Bill Nighy’s stomach?  If you are going to reference the mythology why not use it a little?

Look, this movie is stupid.  It is ugly and it is completely unoriginal.  I saw it for free and still feel like I got screwed.  I beg you, don’t go see this movie.  When you buy a ticket to this film the only thing you are telling Hollywood is “Hey, I like smelly turds!  May I please have another?”