I have had three (going on four) days of working out in the scorching heat.  These kinds of days are probably the worst part about my job but I have learned to get through it.  In fact, driving around in a car without a working A/C unit has probably helped condition me against the heat.  That only goes so far and when temperatures top 104 degrees, no amount of conditioning makes one comfortable.  It is in those situations where I turn to and old, but trusted friend, the Pizza Hut Jug. 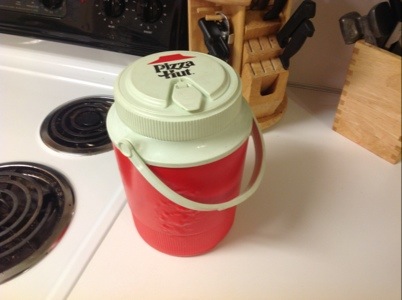 My family acquired this piece of Americana around 30 years ago.  Yes, that’s right, I’ve had possession of this item for 30 years.  I can still remember wanting one as a kid.  I don’t remember if there were commercials for the jug or just some kind of in store advertising but what I do remember is thinking “WOW!  Do you know how much soda can fit in that thing?”  Obviously, my parents eventually got one and I remember it following us to all kinds of outdoor activities and other events.  It was a great cooler and was used constantly.  It was even there for us after an unfortunate accident where it was placed to close to a stove.  You can kind of see the bubbled side in the picture.  No matter though because the Pizza Hut Jug just kept right no trucking, keeping liquids cool for decades.  It was the jug that just wouldn’t quit!

Time advanced and the jug spent most of its live in closets and cabinets but always managed to turn up.  Even after moves across state lines and across town, the jug managed to stick around.  In the late 90’s the family started splitting up (kids going to college, getting married, etc.) and somehow, I ended up with the jug and for many years it languished under sinks and in storage bins just waiting for its time to be useful again.  And that time has come.

I have been using the Pizza Hut Jug daily for the last week.  He still keeps my drinks cool all day, never leaks, and never lets me down.  I have had other coolers and jugs over the years but they have all failed to live up to Pizza Hut Jug’s exemplary example.  Even after being permanently scared, Pizza Hut Jug keeps on doing its thing providing ice cold beverages for thirsty people.