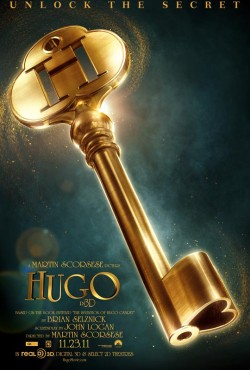 I took my daughter to see Hugo over the weekend.  It took quite a bit of convincing to get her to go.  Even after watching the trailer and playing through a game on the website she was very skeptical about her potential enjoyment of this film.  Ultimately I decided that she was going no matter how she felt.  It became one of those “daddy decisions” that sometimes you just have to make for your child.

I took Emily to see the film because I wanted her to experience something other than the animated fare that she usually wants to see.  Those films, while enjoyable in their own way, are not the kind of thing that sticks with you after they are over.  Even the latest Pixar films don’t seem to have the sticking power of some of the earlier works.  I felt she needed to see a story that wasn’t based in fantasy or make believe but that still has some wonder to it.  I wanted her to have a movie experience that maybe she didn’t quite understand at the time but would come to really cherish as the years go on.  Finally, I wanted to expose her to one of the true masters of the art with a film that would not scar her mind for life.  Hugo seemed to fit those requirements and even though I had to practically drag her to the film things turned out pretty well in the end.

Hugo is a film directed by Martin Scorsese based on the book The Invention of Hugo Cabret by Brian Selznick.  If you are thinking that name is familiar then you are correct.  Brian Selznick is a distant cousin of David O. Selznick, the producer of Gone with the Wind.  That connection doesn’t exactly mean much but I find it a nice piece of trivia especially considering the connection of Brian’s book and Scorsese himself to the overall history of filmmaking as an art form.  It is, in fact, that very subject that Hugo is truly about.  Hugo is about the struggle to not only create and art but to preserve it for those who come after.  It is a subject close to Scorsese’s heart as he is one of the driving forces in the film preservation movement as the founder of The Film Foundation.

Hugo takes place in a Paris train station where a young orphan, Hugo Cabret, has found himself alone and doing the only thing he really knows how to do, fix clocks.  Hugo’s father was a master clock maker but died suddenly in a fire.  Hugo’s only relative is an uncle who works in the train station maintaining all of the clocks but really spends most of his time with a bottle.  The uncle takes Hugo in and teaches him how to work on the clocks but soon disappears.  Hugo, not knowing what else to do or where else to go, continues his uncle’s work while working on a project of his own.  Before he died, his father acquired an automaton of unknown origin and had been working to fix it so he and Hugo could find out what it would write.  It is the only thing of his father’s that Hugo has left after the fire and it becomes his mission to repair the clockwork man so he can reconnect with his father.

Hugo’s existence in the train station is not without peril.  He must steal to eat and also steal from a toy maker’s shop to get parts to work on the automaton.  Orphans caught in the train station are rounded up by the inspector, played by Sacha Baron Cohen, and sent to the orphanage, presumably to have quite the miserable life.  Hugo must avoid the inspector and keep the clocks running so that no one knows his uncle has disappeared.  Although Hugo is quite successful, eventually he gets caught by the toy maker who we come to find out is the French film maker Georges Méliès (Ben Kingsley).  Méliès has had a tough time since the world and his days as a pioneer of cinema are all but forgotten.  The second half of the movie follows Hugo as he discovers the origin of the automaton as well as Méliès hidden past.

You can watch one of Méliès more famous films below but be sure to note the soundtrack was added by the person posting the video:

I wanted to see this film because I was really interested in what Scorsese would do with 3-D.  As I have said before, I am not a fan of 3-D.  I have a lot of criticisms of the technology but overall I just think it is pointless.  I have yet to see a story that is significantly enhanced by the use of 3-D.  None of the films shot in 3-D or converted to 3-D really need the technology to more effectively tell the story and this includes Avatar.  I understand why it has been pushed on us and why people seem to think it has value but for me it is completely unnecessary.  That is why I was so interested that a filmmaker of Scorsese’s talent and with his resume would choose to use it.  For this film, however, it makes sense. Hugo is all about film magic and special effects.  It is about the pioneering use of film to show the people something fantastical.  The use of 3-D makes sense and it is done very well.  It isn’t a gimmick here but it enhances the visuals and the use of 3-D actually has a point outside of the actual visual effect.  In this movie we have a filmmaker telling a story about the evolution of film by using the most advanced technology available to the medium.  It all just kind of works.  The use of 3-D is especially effective in scenes where Hugo is moving about between the parts of the huge clocks in the station.  It gives the film depth and richness that might otherwise feel flat.

Needless to say, I really enjoyed the film.  I enjoyed it so much that I researched the book.  I found that the book tells the story through both illustrations and the written word.  I want to get the book and read it with my daughter as I think there are some things missing from the movie.  I don’t know what they might be but there were a few parts that seemed quickly glossed over.  Everything about the film is well done and Scorsese creates a world in the train station that makes me want to live there.  The movie is populated with great acting talent including Christopher Lee who is very interesting as the librarian although his character’s tone seems to change without explanation.  It is a shame that these actors, like Jude Law and Ray Winstone, have such little screen time but they use their time well and make memorable contributions to the story.  As an overall work I found it quite enjoyable.

I have been asked if the film is good for kids.  I don’t like that question.  I don’t know what is good or appropriate for anyone’s child other than my own.  I can say that the story is heavy on plot so if your child can’t sit still for over two hours and doesn’t seem to enjoy films that tell a story without cute songs or jokes then this one isn’t for them.  There are a few moments that might scare younger kids as well.  If you know your child then you already know if this is a good day at the movies for them.  If you are on the fence then I might suggest you see it on your own first.  It is certainly good enough to see twice.

After the film was over my daughter could not stop talking about how awesome it was to see how they made an underwater effect using a camera that shot through an aquarium with the actual set and actors on the other side.  It was very interesting to listen to her talking about the movie magic old, practical effects used by Méliès while holding on to a pair of 3-D glasses.  I could almost here the wonder and discover of her realizing that movies are really just creations of people who want to make something fantastic.  I don’t know if the film inspired her but I think she got a lot more out of it that I expected.  She enjoyed the story but more importantly I think she liked what the story had to say and she had fun with how it said it.