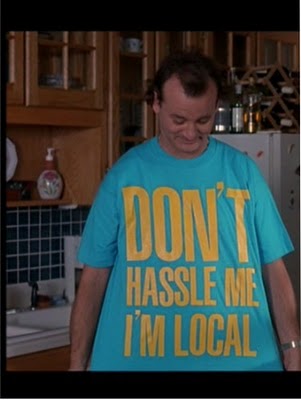 Continuing the Bill Murray theme from yesterday I present a post inspired by the classic film What About Bob?

I haven’t really been good at setting goals.  Conceptually I understand the idea and how it can help focus a person but on an individual level I just haven’t had much success with it.  I think one of the things I struggle with is setting bars so high I can never reach them.  So, at some point I just stopped having goals and started living life on an “as it comes” basis.  While there is nothing inherently wrong with this approach, it takes the right kind of person to live that way AND see progression in their life.  I am not one of those special people apparently.  The result of my outlook in life is to wake up one day and realize I am kind of in the same place in my life at 35 as I was at 25.  Again, I don’t see anything necessarily wrong with that except that it isn’t what I want out of life.  I don’t know what I wanted or expected but I kind of thought things would be different.  After taking some time to really look at things I think the problem has to do with goals, both long term and short term.

There are a lot of things that I want…no NEED… to change about my life but the big elephant in the room that no one really wants to talk about is my health.  I don’t feel good and certainly don’t look good and I seem to be feeling worse all the time.  With that said, I have made huge strides in the past couple of months toward fixing some of my issues.  I have talked previously about cutting myself off from Asthma medicine.  I know it is not a medical diagnosis but I felt that maybe I could do without it so I tried.  It has been almost 2 months now I think and I am doing ok.  I have bad days and have to take some kind of antihistamine to get through them but overall I have done great and now longer feel the need for an inhaler.  That is a fairly big accomplishment for me and I want to build on it.  I believe that if I can change a few more things that I will breath even better and feel better.

So, getting back to the goals thing I want to make two short term goals that I hope will put me on the path to a better life.  Number 1 is cutting out all fast food.  I have already cut out about 90% of soda and caffeine and I haven’t eaten much fast feed recently but I can do better.  I am just not sure how to verbalize that goal.  At first I thought that not eating anything that comes from a location with a drive through would be a pretty good way of stating it but then I started to think about exceptions.  Could I get a salad at Chick-Fil-A?  The same question applies to a lot of other places as well.  What if the kid want’s a Happy Meal, do I just refuse to eat?  I still haven’t figured out the rule but I am comfortable with the idea of no fast food other than a salad.  How could I change this rule for the better?

The second goal is to increase my amount of physical activity.  It has been tough to be outside this summer.  Especially with my breathing issues.  I have tried coming home and playing with my daughter outside but the heat has just been really difficult to deal with.  That is not exactly an excuse as I also have a YMCA membership but I like being outside.  That is my preferred way of exercising.  The Y is great but I have had a hard time figuring out when I can go and not give up time with my family.  It looks like the best time would be in the early AM before work but I haven’t tried it yet.  Getting up earlier than I do now is difficult.  The goal, however, has to be 30 minutes a day of sweat inducing exercise 5 days a week.  I didn’t choose 7 because of my work schedule and some days I work late so I wanted to give myself a few days off in there for both recovery and to give some cushion for the days I just can’t get the time.

There we have it.  I don’t see any reason why I can’t meet these goals for 30 days.  After that it will be time to review and set new goals.  A really cool thing would be to see this snowball into something bigger and result in a full life change, but for now it is best to start small.  Baby steps right?