Around 1990 or so I discovered stand-up comedy.  Seriously, I discovered it.  I don’t think it existed before I found it.  I am a trend setter like that.  Kind of like how Christopher Columbus discovered America which was really an island which already had people living on it.  But yeah he discovered it.  Anyway.  At some point in high school I got really into stand-up.  Not as a performer but as a fan.  I used to love watching the hour long HBO shows as well as things like MTVs Half Hour Comedy Hour but what really blew my mind was The Comedy Channel.  I can remember being at my aunt’s house in Kentucky one afternoon for some reason and finding this channel on their cable system.  It was the most awesome thing in the world.  The channel showed hours and hours of stand-up.  I couldn’t begin to name all the comics I saw but if I am a fan of any comic today it was probably because of The Comedy Channel.  Of course one of the comics getting a lot of airtime back then was Marc Maron.  I really got into his stuff because I felt he was like me.  He was mad, full of angst, and really had it in for the rich/famous/popular.  That stuff was golden to me back then and I ate it up.  Hell, I still love that kind of raw, angry comedy. 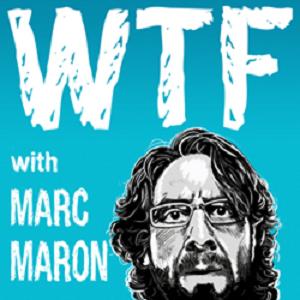 As stand-up comedy sort of got pushed off The Comedy Channel, later to become Comedy Central, I kind of forgot about the profession.  Oh I still enjoyed good stand-up but I didn’t get to take it in hours at a time like I did in college.  I got a job, got married, had a kid, and life kind of changed for me but I never forgot my love for comedy, it just got buried for a while.

Not long ago I found the WTF with Marc Maron podcast.  Listening to the podcast has brought back a lot of great memories.   Marc talks about the comedy business quite a bit and constantly drops names of comedians I used to love but now rarely have a chance to sample.  The podcast has made me want to go back and rediscover all of those great performances that I have forgotten as well as check out new stuff by today’s comics.  Sadly it doesn’t seem like there is anywhere near as much comedy on TV as their used to be but there are alternatives.  I am using Netflix to queue up some great stuff.  I have Bill Hicks, Louis CK, Brian Regan, and a whole bunch of other comics ready to go in my instant queue and I am really looking forward into getting in and having some good laughs.  I think I miss laughing.  Don’t seem to have been doing enough of it recently.  It is like therapy but it only costs me about $10.00 a month instead of $150.00 a session.  Ha.  That’s a pretty good joke right there don’t you think?

Anyone have a comic they think I should check out?