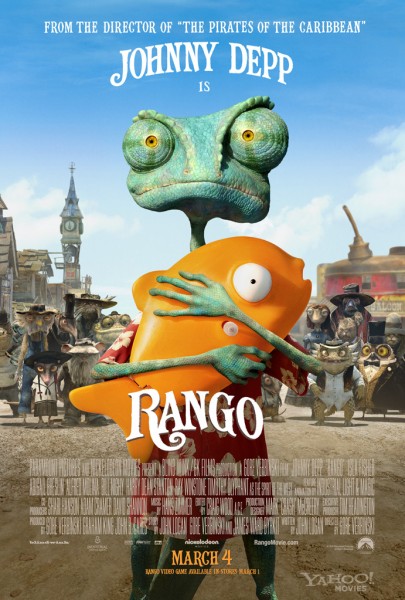 I finally had a chance to see Rango last weekend.  Rango is a film I had been looking forward to since first hearing about it sometime last year.  The film brings back the Pirates of the Caribbean team of director Gore Verbinski and Johnny Depp along with the always great Bill Nighy and others.

I really got interested in this film after seeing a behind the scenes clip that showed the unique way they went about making the movie.  Verbinski eschewed using the standard motion capture process (with the green suits and little, white ping pong balls) and instead built simple sets and let the actors actually act out the scenes in costume.  The animators then took this film and based the animated performances on the footage.  In the final product, I think this technique creates what feels like more real interactions between the players.  It is a subtle effect but it adds depth to the animated characters that you don’t seem to get from the traditional motion capture based technique.

Rango is a pet chameleon who, through an unexpected accident, finds himself in the real desert trying to survive hungry eagles who have a taste for lizards, unfamiliar and dangerous territory and ever present thirst.  He ends up in the town of Dirt.  Dirt is the kind of town you find in classic Westerns.  It is a town that is down on its luck.  The water has run out, it is run by a mayor that may not have the town’s best interests at heart, and it is terrorized by both the eagle and the mayor’s henchman, Rattlesnake Jake.  It is inhabited by the expected cast of characters of course, old and grizzled cowboys, unscrupulous bandits and, of course, the young, female bartender with the heart of gold.  When Rango gets to town he accidentally kills the eagle and thus becomes the hero of Dirt.  This sets up the rest of the story.  As the town’s new sheriff, Rango must find his way in Dirt, discover the “spirit of the West”, save the town and become the man…ahem…lizard he was always meant to be.

I really loved this film.  As a parent of a child under 10 I see a lot of animated movies.  Let me clarify…I see a lot of bad animated movies.  For example, the week before seeing Rango I saw Mars Needs Moms.  That film is horrible.  The animation is bad, the story is a joke, and although I really like Seth Green, I really think the performances are weak.  it is a film that has nothing to offer.  Thank goodness I saw it in 2-D as 3-D only makes a bad film even worse.  Like Mars Needs Moms, most of these animated films are just not good and I have come to dread the family movie day when we go see one of these time wasters.  Rango, however, was a different experience. 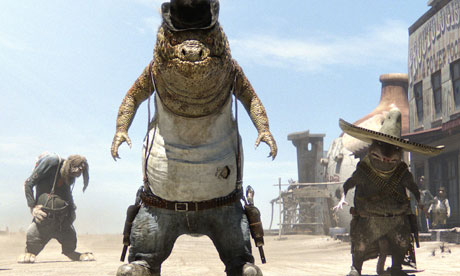 First of all it looks fantastic.  Rango is the first animated film produced by George Lucas’s Industrial Light and Magic effects house.  Everything in the film is fully realized and textured.  The film even has depth and not because of 3-D.  In fact, the film was not released in 3-D.  I guess even Lucas gets things right every once in a while.  Visually, Rango is as good as anything PIXAR has produced.  In fact, I think in many ways it beats the smooth look of PIXAR films with the intricacies of its textures.  Dirt feels dirty.  The desert looks dry, and Rango himself looks like he really has scaly skin.  By sticking to the 2-D presentation, Rango also has a very bright look which enhances the desert feel.  I can’t say enough how happy I am that this film did not go 3-D.  Accoring to Verbinski, there were lengthy discussions about 3-D but it didn’t happen due to financial pressures and his insistence that if it was going to be done that it be done right.  I think the movie going public got really lucky that this film came out in 2-D and I hope Verbinski and others realize that it just doesn’t add to the experience.

Performance wise the film also works very well.  What I really dislike about animated films is how they have all become about the “stars”.  I understand that star power is needed to sell a film but honestly the film itself usually doesn’t need a name voice to work.  It needs a voice talent that can give a performance that makes a character come to life.  Look at the old Disney films.  They didn’t need Hollywood actors to lend their voices to the film.  Who was the voice of Snow White?  When I see an animated film I want to become immersed in the story and sometimes a famous voice can take me out of that experience.  With Rango I think the voices work.  I honestly did not even realize Jake was Bill Nighy until I saw the credits and I still don’t believe Ned Beatty was the mayor.   He sure didn’t sound like Otis from Superman the Movie.  Even though it is obviously Johnny Depp as Rango, Rango is his own character and I forgot I was hearing Depp fairly early on in the film.  Depp is unbelievably talented at becoming a character (see Captain Jack Sparrow) and his work on Rango is just as good as any of his live action roles.  I mention Isla Fisher only to note that she is in the movie.  Honestly I would not recognize her voice even if she was standing right behind me having a conversation.  She did a fine job with a part that really didn’t have a lot going on other than to advance certain plot elements.  Would have been nice to see a professional voice actor get the opportunity to do some high visibility work but again selling tickets is the important thing and big names contribute to that goal.

Rango is a love letter to classic spaghetti Westerns.  It even has a not so subtle reference to Clint Eastwood.  It is full of western references as well as a healthy sprinkling of non-western moments that call out to films like Apocalypse Now and Star Wars (surprised?).  The subject matter can be dark in spots and there are a few moments of questionable language but overall it is enjoyable for both parents and adults.  Parents should always use their best judgement but personally I think this type of film is much better for kids than say a Chipmunks movie.  Children need to know what good film is like instead of being force fed the junk that seems to fill up theaters.  Either way, Rango is a great film and I give it my full recommendation.