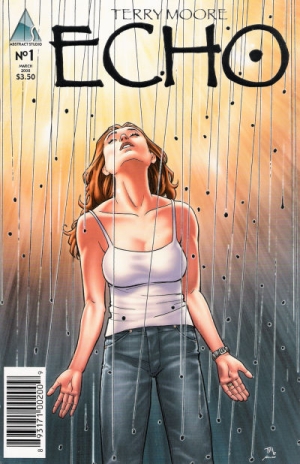 For the past two years I have been reading a wonderful comic series by Terry Moore entitled ECHO.  The series is wrapping up next month with issue 30 and I can’t be more excited about reading the conclusion.  Prior to this series I had not read any of Moore’s work but I was familiar with his name and knew of his massively successful series Strangers in Paradise.  SiP (as it is often abbreviated) had just ended by the time I really got back into comics (read about how I got into comics in Part 1 and Part 2 of “A Fanboy’s Story”) but still had enough buzz to pique my interest in his next series which became ECHO.  I picked up the first issue and from that issue decided to continue with the series.  The first issue didn’t really knock it out of the park for me but I liked the art and I felt the story certainly had some legs.  I put the series on my monthly “pull-list” and boy am I glad I did.

I don’t necessarily want to give a full review/synopsis of the series because I think it works better if you don’t know where it is going.  In short, however, ECHO tells the story of Julie Martin, a kind of down on her luck photographer who is in the middle of a divorce when she has an unfortunate encounter with a military exercise gone wrong.  Julie soon finds herself in possession of an experimental weapon that bonds itself to her body and exhibits interesting and powerful properties.

I first thought this series was going to be the standard government agents and other shady organizations chase a regular person around the country because she just happened to be in the wrong place at the wrong time kind of story.  This kind of structure is seen all the time in action movies and political thriller novels.  What is different here and what makes this story unique is that it does not try to insult the reader’s intelligence by dumbing down the details.  Over 30 issues we get plenty of experimental science, particle physics, and a whole host of really adult themes.  Yes it is a comic book but it really is a comic for adults.  Oh, and by the way, Terry Moore’s art is fantastic.  I don’t think anyone in the industry today draws a woman quite like Moore does.

The series has really been enjoyable and while I am excited for the ending I am a little disappointed as well.  I don’t think he ever really gave us a full understanding of what the characters could do.  I feel Julie especially could become this great, female hero but the boundaries of the story don’t allow it.  I would also see a little more color art.  The covers are great and are in color but the pages inside are in black and white.  It is possible that coloring the pages would take away from the clean art style but I would still like to see a few pages in full color.  Still, I recommend this series very strongly.  You can pick up collected editions in most comic book retailers, online, and possibly in standard bookstores.  Now would be a good time to hop on the ECHO train as I suspect we will be seeing a film version hitting local theaters in the not too distant future.