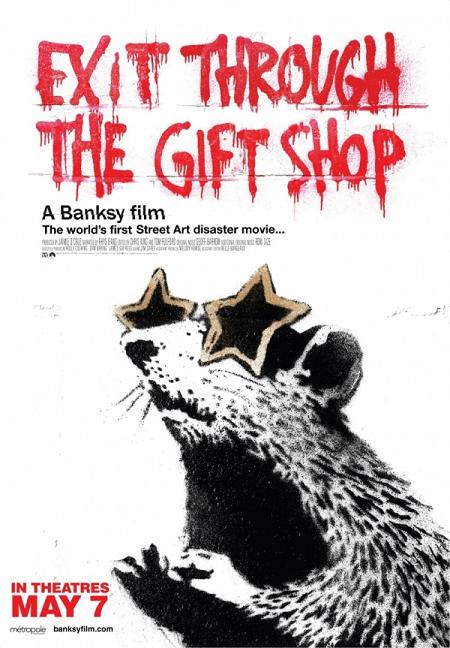 This week’s “What’s on Netflix” selection is a documentary by famed street artist known only as “Banksy”.  Exit Through the Gift Shop played at Birmingham’s Sidewalk Moving Picture Festival in 2010 to rave reviews.  I missed it during the festival but was happy to see it show up on Netflix not long after.  I can’t say I am very familiar with the street art phenomenon but I had heard of Banksy through a mysterious appearance in Birmingham and the amount of press the film got during the Sidewalk festival made it interesting enough for me to give it a shot.

The film is mostly about Thierry Guetta and his obsessive need to video tape everything in his life.  Through a fortunate series of circumstances, Guetta becomes acquainted with street artist Shepard Fairey (later to gain fame as the creator of the Obama HOPE poster) and begins following him around and videotaping his art “installations”.  Guetta films hundreds of hours of footage of various other street artists and eventually meets up with Bansky.  Guetta is able to convince the artists to allow him to film them under the guise of making a documentary.  Guetta, however, has no idea how to put together a film and never really tries.  He is just obsessed about recording.  At least that is what we, the audience, are told.  Bansky convinces Guetta to put together a film which turns out horrible.  Bansky then convinces Guetta to become a street artist himself while he takes Guetta’s footage and puts together the film.  The film ends with Guetta having a massive art show and selling thousands of dollars of his supposed art to the masses.

The film itself works on two levels.  At first it seems like we are seeing the fortuitous result of an obsessive compulsive.  The shots of street art in the making are both interesting and often funny.  It is enjoyable to see this legally gray activity on film.  Bansky, however, really doesn’t care about the process of street art.  He is really trying to make a point about the commercialization of art.  The film begins with Guetta’s main business of selling vintage clothes.  Guetta laughs at how he is able to buy crates and crates of old clothes at practically nothing and then sell the items to the local public at fantastically inflated prices by calling it “vintage”.  From the very beginning Bansky is telling the audience where the film is going.  By the end, Guetta, in the guise of “Mr. Brainwash” is doing the same thing with art.  He is mass producing his “art” that he has basically copied from the street artists he has worshiped and selling it back to the public for much more than it is worth.  The art is junk, fake, and worthless but because the people buy into the marketing they are willing to stand in line for days to pay out the nose for it.

It is here that Banksy is making his statement against the commercialization of art.  The same can be said about the title of the film.  If you have ever been to an amusement park, Disney parks being the prime example, you know that just about every attraction ends by dumping the patrons into the gift shop where one can buy any number of branded products based on the attraction just experienced.  This practice, while profitable, immediately shows how fake and contrived the experience in the attraction ultimately is.  By titling the film Exit Through the Gift Shop, Banksy is telling the audience that they are about to experience something similar.  Nothing in the film is real but please buy into the experience.  Personally I think it is pretty clever.  He even slips in a scene at a Disney park where he and Guetta are able to set up a piece of art.  It is all part of the message and Banksy wants us to see the film for what it is even if he never comes out and says so.

There has been plenty written about whether or not Guetta is real and if the entire film itself is a fake.  I fall into the camp that thinks is is completely made up.  It just works too well and the title, in my opinion, gives it all away.  Maybe Guetta did film those mountains of tape and maybe not.  It doesn’t matter though because the film and its message still stand.  Banksy, however is a clever guy and I think he could pull a hoax like this off.  Either way the film is certainly worth a watch which is why I give it my recommendation for the week.