This is my first post of 2011.  Things have been busy for me but I think I have struck upon an idea that might keep me motivated going forward.  I want to post at least every Friday with a film recommendation that you can watch through Netflix streaming.  So, without further ado…

Maybe one of my enterprising readers can come up with a logo for this feature for me (wink, wink).  If not, maybe I will get around to making something myself.  Well, on to this week’s recommendation. 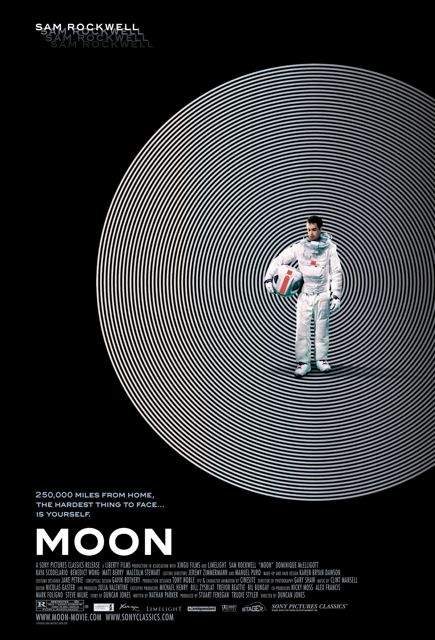 Moon is the first film from director and writer Duncan Jones, son of David Bowie.  It stars Sam Rockwell as a miner left alone on the moon to oversee an automated helium-3 mining facility.  Sam (the character’s actual name) is on a three year contract to man the station with basically nothing to do but monitor the mining vehicles and troubleshoot the occasional problem.  On one of these troubleshooting trips, Sam finds something he does not expect that changes his entire understanding of his reality.

That’s really all I want to say about the film’s plot as the evolution of the story is where the power of the film resides.  Rockwell gives a brilliant performance as Sam and his struggle with being away from his wife and child for such a long period of time.  Rockwell is the only human in the film (other than sporadic video messages from people on Earth) and he has to carry the entire story himself.  Rockwell succeeds and the film is a testament to the range and skill of Rockwell as an actor.  Sam’s only companion is a computer system, named GERTY, voiced by Kevin Spacey in what is a subtle but obvious homage to HAL 9000 from 2001: A Space Odyssey.  The call outs to classic Sci-Fi films don’t stop there.  There are production elements that echo Alien, Silent Running and the early Lucas masterpiece THX 1138.  The effect is to give the film a feeling of reality especially when compared to the current crop of Sci-Fi films that tend to rely on CGI wizardry over story and performance.

Personally what I like about Moon is that it tells a human story about isolation from the entire human race.  It also asks an interesting question, “Are we more than the sum of our experiences?”  Sam has to come to grips with a reality that he understands but has a hard time accepting.  What would any of us do if we found out everything we know is a lie?  Moon addresses these very human questions in a setting that is based in the future but the speculative technology doesn’t get in the way of the story.  Good science fiction always uses its setting to tell the story and doesn’t let the setting become the story.  It is for this reason that the previous film I discussed, Tron: Legacy, ultimately fails.  Once you strip away the visual and audio experience the story that is left is weak and uninteresting.  Moon, on the other hand, has very basic and practical effects but is much more engaging and leaves the viewer with plenty to think about and discuss.

Moon is a type of film that just isn’t made anymore.  Even when films like this do make it to the big screen, the general public usually shows little interest.  I am not sure if it is the lack of special effects or the need to pay close attention to the story that causes the public to miss these films but the lack of box office impact is what makes such work so hard to find.  This film is intelligent and thought provoking in exactly the way Avatar (which I also enjoyed for different reasons) is not.  Keep in mind that Netflix takes films off of Watch Instantly all the time so take the opportunity to watch this film while you can.  Otherwise be sure to queue up the DVD before Jones’ next film, The Source Code makes it to theaters.

I hope you enjoyed this first edition of What’s on Netflix.  Please come back here to discuss the film if you are so inclined.  I hope to get out the next edition early so all of you out there have a chance to check out the film on Friday night.  I am also willing to take suggestions so send your movie picks in.