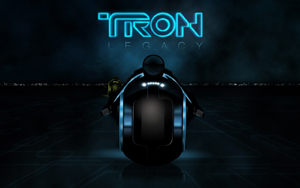 I am one of those kids who fell in love with TRON in the 80s.  The strange thing is, I have no idea when I actually saw the film.  We didn’t go to a lot of movies back then and I don’t have a memory of seeing this one in the theater.  I remember wanting to see it.  I remember throwing the occasional quarter into the TRON arcade game but even that was rare because getting a quarter out of my dad was a feat all by itself.  I even remember other kids having the light cycle toys and thinking they were awesome.  Even if I never saw the movie, the world was fascinating to me.  It embodied the ultimate video game experience especially for a kid of seven who rarely got to play video games.  At some point I guess I saw the film.  We probably rented it one night.  Once we got a VCR and a rental shop opened in town we rented quite a few movies.  I guess we were catching up on all the films we never caught in the theater.  So I assume I saw TRON on a rental.  Even though I can’t remember when or where I saw the movie I know that it became an instant favorite.  From then on I would watch it anytime it showed up.  I didn’t care if it had commercials or not.  If TRON was on, I was watching it.  I am a sucker for geek fantasy.  It was thus with great anticipation that I waited for TRON Legacy to hit the theaters and last night I finally got a chance to experience the film for myself.

I have to be honest, I was quite disturbed by the early reviews for the film.  They weren’t good.  It was a bit disheartening really when I heard people I trust, people that are kindred geek spirits express their disappointment with the film.  In fact, those reviews kept me away from the theater on the opening weekend.  I really didn’t want to be disappointed so I found other things to do.  I did, however, continue reading the reviews.  Most were mediocre and some were downright horrible and nothing was particularly glowing.  I got the distinct feeling that the film was not going to live up to my expectations.  It was the same feeling I got hearing early reviews of The Phantom Menace and The Kingdom of the Crystal Skull.  Unlike with those other films I though this might be the time I would listen to the critics and skip a film that I had previously been very excited to see.

Monday came around, however, and I found myself in an interesting situation.  I normally have Monday night to myself.  On any regular Monday I go to a local pizza joint and play cards but I kind of didn’t feel like doing it this time.  I really didn’t want to stay home either.  My daughter was having a friend over and I would have just been in the way.  I considered my options and finally decided I could see the film at the new IMAX screen that recently opened at my favorite cinema, Rave Motion Pictures – Patton Creek.  Even though I was skeptical about the film, it was high time I experienced the new theater and after a short debate with myself I made the decision to head out for the evening.

At this point it is important to clarify a few things.  What constitutes the rest of this post is a review of the IMAX 3D experience.  I likely won’t be talking about the film but really just the presentation.  The review of the film itself will come in another post.  I feel like that breaking up this particular film this was is necessary because film presentation is in a state of flux.  You can see a movie in 2D, 3D, and IMAX in most metropolitan areas.  There are also plenty of theaters that still use actual film so there is the question of digital versus film.  How to see a film is just as important as what film to see and each experience has its pros and cons.  With that in mind I am breaking up this review into two parts.  Now, on to part 1.

I have seen IMAX films in the past.  Mostly this has been documentaries or animated fare that plays at different science and learning facilities.  Those particular experiences have been almost exclusively on domed screens.  In general I don’t like the domed screens.  The edges of the film are always distorted and I tend to suffer from something akin to motion sickness.  I enjoy the big vista shots that are often used but most things just don’t benefit from the larger format and the distortion on the edges consistently bothers me.  On the other hand, the sound is always magnificent and usually worth the price of admission.  When Rave announced they were adding an IMAX screen my first response was “meh”.  I knew it would not be the domed version and the screens at the theater are already nice so I didn’t see the value of the IMAX format.  Of course I knew I would eventually check it out.  That’s just the kind of guy I am.  As stated previously, TRON Legacy provided the opportunity for me to finally check out the screen.  I am sure glad I did.

The IMAX 3D presentation of TRON Legacy was absolutely astounding.  I walked into the theater and was immediately stunned by the size of the screen.  This thing is big folks.  I decided to take a seat close to the top of the theater.  I assumed this would provide the best viewing experience considering I get a bit queasy if I can’t see the edges of the screen.  One cool thing to note is that there was no silly preshow.  No ads, no 6 month old trivia questions, and certainly no Entertainment Tonight clone.  Just a black screen.  I am not a guy who really cares about the preshow so this was sort of nice.  The other thing of note is the glasses.  The glasses were not pre-packaged and were a bit dirty.  The lenses were especially unclean.  As I looked around it seemed everyone was trying to clean the lenses.  I did the same and leaned back into the seat to wait for the film to start.

The first thing I noticed when the previews started was the sound.  Sure the screen is big but the sound was explosive.  Seriously, I think something in my head blew up.  It was that loud.  Personally I think it was too loud.  I had to but up my hoodie to muffle the audio just a bit.  It was even worse during certain parts of the actual film.  I wonder if it just needs a little tweaking or if putting IMAX sound into a smaller space increases the overall volume.  The effect, however, ended up being that nuanced sound was lost in favor bass and overall volume.  Quieter scenes sounded great but the action heavy scenes were overpowering.  I don’t think this is a fault of the film.  I think it is just the result of the shear volume of the IMAX theater.  Even though some parts seemed too loud for me, the audio was crystal clear.  When I wasn’t put off by the volume I was amazed at how full the room sounded.  IMAX is the perfect venue for the Daft Punk soundtrack which is Oscar worthy.  I think hearing the soundtrack in any other format will be a disappointment.  The audio alone really was enough to justify the expense.

On to the visuals.  I don’t know what the underlying technology of IMAX 3D is but it looked about as good as 3D possibly can.  Everything was clear and the film did not appear darkened by the use of the glasses.  This is a major problem I (and Roger Ebert) have with most 3D presentations.  The glasses naturally darken everything and I don’t think theaters and distributors have worked out the right way to present films to compensate for the darkening effect.&nbs
p; The glasses do make certain things outside of the screen look odd especially if they reflect light but I got used to that quickly.  I would like to try the film again but sitting about halfway down to see if this changes the reflection issue at all.  But let me be clear here, the parts of the film that were 3D (it isn’t entirely in 3D) looked great.  The larger screen certainly makes the 3D effect work better and the combination of IMAX and 3D is really the way to go.  Again, a big win for the IMAX 3D experience.

The film looks and sounds great in IMAX but here is the big question…Is it worth the price?  I paid $15.25 to see the film on a Monday night.  That is high.  I am not sure that IMAX in general provides an experience worth the price premium over the standard admission.  I say “in general” and that is an important caveat.  For some films it is a value.  There is no point in seeing the latest romantic comedy in IMAX.  Although I don’t think they would show such a film in the format, the point still remains.  The only films that should be seen this way are films that are designed to be audio/visual treats.  TRON Legacy is one of those films.  The film mostly takes place in what is really another world and and the story only works if the audience is immersed in that world.  This is exactly what IMAX can do.  I won’t spend $15.25 for many films but for those special few films I will gladly spend the money and thank the theater for the privilege.

So, final thoughts about IMAX 3D?  I loved it.  It is the ONLY way to see TRON Legacy.  I would like to see some kind of comparison of reviews between people who saw it in IMAX versus other formats.  I wonder if the IMAX reviews would be generally more positive.  The format is not for every film but for those special few that can live up to the viewing experience that IMAX can provide the benefits are really a joy to behold.  I won’t go to every IMAX feature but there will be a few I won’t pass up.

I want to end this with a plea.  If you are planning on seeing TRON Legacy during the holidays, please see it in IMAX 3D if you can.  You can come back and thank me later.