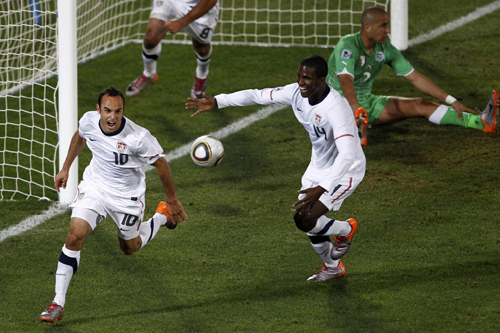 I grew up playing Soccer.  I played from about age 7 or 8 until I hurt my shoulder during a college intramural game.  Somewhere after that point I lost interest in the sport.  I guess I really lost interest in anything other than playing in high school.  The team I was on wasn’t very good, was poorly coached, and the players would rather fight amongst themselves rather than play the game.  As I entered my senior season I really didn’t care much for the game but went through the motions because for some reason I wasn’t ready to quit.  I lost my heart that season and sat out more games than I played and quite honestly I didn’t care.

College came around and I forgot about the game for a while until some friends got up a team for the intramural sports league.  I played a few seasons including some 5 on 5 but the turning point came in early 1998.  We were involved in a full 11 on 11 match and I was in my chosen position of Keeper when I went for a diving save.  As soon as I hit the ground I knew there was trouble. Pain exploded in my right shoulder.  I wasn’t in the same shape as I was in 1993 and my body was heavier and my shoulder weaker.  To this day I don’t know exactly what happened but I suspect the impact popped my shoulder out of joint.  It took some time to get up and off the field.  I stuck around for a little while thinking I had just sprained the shoulder and I could go back in after resting a bit but the pain never let up.  When I decided it was time to go I had other challenges to deal with.  I couldn’t use my right arm and could not get the car into gear.  Luckily it was an automatic and I was able to wrangle my left arm around enough to pull the shifter and drive home.  Getting undressed was an exercise in frustration as well.  Again, I could not move my arm and when I tried pain ripped through my shoulder.  Eventually my future wife was able to help me get the keeper jersey off, and if you know long sleeve keeper jerseys you know the added difficulty that would occur getting it off.  I took a bath and tried to go to bed.  I was not insured at the time so there was no going to the doctor/hospital for me.  It was suck it up time and suck it up I did.  My shoulder still hurts to this day if I throw a football/baseball/soccer ball, etc.  It was the last time I played soccer.

Flash forward 12 years to the 2010 World Cup.  For some reason I found myself intensely watching all of the events.  I only marginally cared for the 2006 event but this year’s cup fascinated me.  Maybe there was more coverage but whatever the reason I watched just about any match I could.  The US team’s performance really captivated me and the last second win against Algeria was really exciting.  The Cup rekindled my interest in the sport.  A few months after the Cup ended my daughter asked if she could play soccer.  I of course said “yes” and registered her for the league in late September.

As often happens in youth sports coaches are hard to come by and even though I suspected my work schedule to occasionally interfere I signed up an as an assistant.  The season has been fun and the team has done well finishing second in the league.  Coaching the team has added to my growing interest in the sport.

These days I find myself watching more soccer (yes, I am using the US term for the game) on TV.  The other thing that is happening now is that I would like to play again.  I don’t think I could ever be keeper again.  I would always be worried about my shoulder but I could play in the field.  If I can ever get back into shape again.  I have watched some adult leagues around town and they are both serious and athletic.  I figure it would take me at least a year of hard work to be able to take the field again but the desire is building.  It would be nice to kick the ball around again before I am completely worn out and used up.

Until that time I am content with coaching, watching, and playing video game versions.  It is nice to have a sport I care about again.  Here’s to looking forward to the 2014 World Cup!