There was a time when the Sony brand once meant something to people.  At least it did to me.  I felt that Sony made the best consumer electronics and I would only buy Sony branded products.  The remnants of this opinion can still be seen all around my house.  From alarm clocks to stereo equipment to televisions my house is filled with Sony gear.  Times change, companies change and what once was a trusted brand has become another also ran in the electronics world.

Professionally I have been in the electronics business since 1998.  During that time I have become intimately familiar with Sony as a business.  As a result of this association I have gotten to see the evolution (or de-evolution) of the company over the past decade and what I have seen is quite disheartening.  The quality of Sony’s products has declined at an astonishing rate.  Today the brand is no better than the junk you find at Radio Shack.  Certainly market pressures to bring prices down are partially at fault but even their professional gear doesn’t show the fit and finish of products made ten years ago.  What is worse is that the company still seems to think the “SONY” brand still carries value as their products are generally more expensive than competing products from other manufacturers.  To illustrate this point, let’s look at a recent experience with Sony on a personal level.

In 2006 I bought a brand new, rear projection television.  It is a Sony 50″ TV model KDF-E50A10.  At the time the rear projection units were starting to go out of still for the newer plasma and LCD models but for the price I was willing to pay I could get much more TV if I went with the RP unit.  I came off over $2200 for the TV and was happy to do so.  After running a calibration on the TV it was beautiful.  Sure it had the viewing angle issues that are inherent to RP sets, but my house is so small that it makes off angle viewing a non-issue.  I was very happy with my purchase…until about 1 month ago.  During the time before the middle of August I bought 3 replacement lamps for the unit.  Again, I knew this going into the purchase and was not concerned.  I was already VERY familiar with the technology through my professional life and knew the maintenance requirements.  The last lamp replacement was early this year and everything was going fine until a few weeks ago when I noticed something I hoped never to see…a yellow spot in the image. 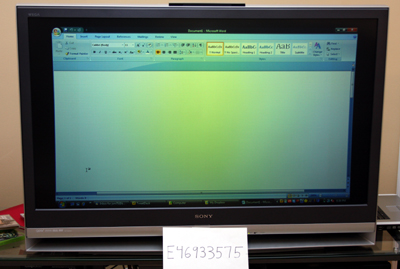 The picture on the left doesn’t quite reproduce what I see in real life.  I had a hard time getting it to come out just right but you can see the discoloration in the center.  Anyway, this was a problem I was already extremely familiar with when it came to Sony’s LCD projection technology.  It occurs due to heat slowly destroying the blue polarizer and then blue LCD panel.  When I bought the TV I had hoped that I would not encounter this problem because supposedly Sony had engineered the units better than the earlier versions.  Nope.  It is the EXACT same problem I have been seeing since 1998.

When I first noticed it I was pissed.  It is only 4 years old!!!  I have underwear older than that!  I actually have picture tube televisions that are over 10 years old and still look amazing!  This TV should have lasted at least half that time!  My TV is, of course, out of warranty.  My first thought was to repair it.  It can be repaired but depending on the exact design of the optical engine it is often not worth the expense.  Well over $1,000 of expense mind you.  I then decided to look around the internet to see if anyone else had experience with this issue.  I was trying to find out how easy or difficult the repair would be.  I could do the work but I didn’t want to tear it apart only to find out I had to replace the entire optical engine.  During this research I found something unexpected.  There are existing Class Action Lawsuits against Sony for this exact problem covering a wide range of RP models.  This is great and all but class actions generally net negligible benefits for members of the class.  I kept researching and found something else that was interesting.  Sony had extended the warranty on many models and was even offering replacement TVs in lieu of repairs.  All I wanted was a repair and that is what I hoped to get when I decided to call Sony directly.  Things didn’t work out the way I had hoped.

I called Sony and quickly found out that a repair was no longer an options.  They did offer to replace the TV with one of 4 new, LCD models.  Sounds great right?  Not so fast pardner!  The “free” model is a 40″ unit.  Let me do the math…that is 10 inches in diameter LESS than what I started with.  That’s a pretty big difference.  To get something of equal or greater size I would have to pay a “discounted” rate for 55″ unit at $525 plus tax!  So, Sony lies about the life of its products and is facing litigation because of it and I am supposed to be happy that I can buy a new TV at a discounted rate?  Ridiculous but I obviously didn’t have any other recourse other than to deny the offer entirely and pursue action either through the class or individually.  I didn’t want to pursue either option because suing individually would be prohibitively expensive and being a member of the class would net zip for me in the long run.  So, I accepted the 40″ unit under duress.  I am in the process of taking care of the paperwork now and should be looking for the replacement unit sometime in the near future.  I get to keep the original TV so maybe that is a consolation.  Not sure what I am supposed to do with a crappy TV but I digress.

The point is this, Sony was knowingly selling a poor product, lied about its life, and did not contact customers once the widespread issues starting to occur.  Pretty horrible customer service but hey, it failed out of warranty right?  My problem.  I should thank Sony for offering anything yes?  Maybe so but this kind of crap kills brands and destroys companies.  Between this and my professional experiences with Sony I am no longer the fanboy I once was and Sony has likely lost a customer for life.

Sony has been struggling with a depressed stock price and reduced revenues and profits since 2000.  This is about the time I noticed Sony as a company taking a nosedive.  I believe this is in no small part due to the failure of the company to deliver on the promise of their brand.  The SONY name just doesn’t mean what it used to and both as a customer and a business partner I no longer see Sony as a brand I am confident to recommend.  I know others both in and out of the industry feel the same way.  I don’t know exactly why this has happened but I lay part of the blame on Howard Stringer.  Sony’s current CEO is from the entertainment business and doesn’t have any experience in electronics.  I believe he was a bad choice for Sony IF they still want to be in the electronics business.  It is quite obvious they are letting that part of their organization flounder.  Whatever the reason, Sony has failed to live up to the image it cultivated through the 80s and 90s.  My only hope is that the company realizes these failures and rights the ship.  It is a hard thing to do but if anyone can work it out, Sony can.