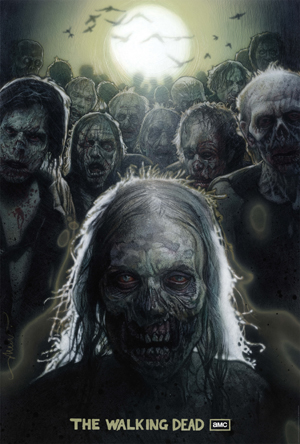 I have gushed over Robert Kirkman’s The Walking Dead for some time now.  I picked up reading the comic a few years back on the recommendation of just about everyone in the comics world.  Of course I am also a long time zombie fiction fan so this was a fairly easy story for me to pick up.  My initial opinion was that the story had been done before but I liked the art enough to stick with it.  By the second trade editions, however, I was hooked.  While most zombie fiction only runs from the initial outbreak to a group of survivors and they few days until they are mostly/all dead, Kirkman’s story follows a group of humans for months and years past the outbreak.  The story became a study of humanity struggling to survive in a very hostile world.  The fact that there are zombies all around becomes a minor annoyance as the human stories took over.

Last year or so it was announced that AMC had picked up the rights to The Walking Dead and the channel was planning on making a TV show out of the books.  The news that Frank Darabont would be directing came shortly thereafter.  Darabont is the director behind The Shawshank Redemption and The Green Mile.  I have been looking forward to the adaptation since it was announced and the news leading up to this week’s San Diego Comic Con has been very encouraging.

Today I found the poster on the right at Ain’t it Cool News.  This poster is by one of the great movie poster artists, Drew Struzan.  His work can be seen all over the place and he has worked to create posters for many blockbuster films including films like E.T., Indiana Jones, Harry Potter and the Star Wars film series.  Click on the poster for a larger version.  I love the poster and I think it really shows that AMC is dedicated to the project by hiring such a high profile artist to work on the marketing.

What seems great about this project from AMC is that they really seem to be trying to make this a quality show.  At the very least the channel has put together a great creative team and doesn’t seem to be holding anything back.  They proof, however is in the pudding and we won’t know much until the first episode airs.  It is my hope however that the show takes off and we get to see some of the great moments from the comics play out on film.

Of course I continue to recommend checking out The Walking Dead in its original form.  The trades are available at most bookstores and comic shops and you can even get the first issue for free from comixology.com.  Comixology has apps available for the iPhone and iPad as well as a PC reader.  Check it out and great ready to see the show coming in October.  I’ll be there!