I am one of those guys that has a wealth of absolutely useless knowledge banging around between my ears.  I can destroy trivia competitions while half asleep, but I can’t multiply two digit numbers without a calculator.  I can name thousands of movies from short audio clips but I can’t remember the capitals of all 50 states.  For whatever reason, I remember mountains of information about all things pop culture but often forget my own phone number.  I assume this trait is due to spending way too much time in front of the TV and at the movie theater My wife, on the other hand, has but a passing knowledge of these things.  See says she didn’t watch TV as a kid for many reasons and just never developed the voracious appetite for all things pop culture like I did.  This difference between us also comes up at the oddest times but when it does a situation arises where it seems like we are from different planets. 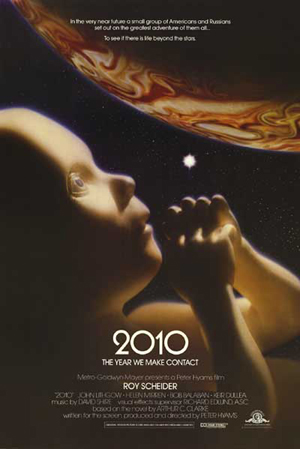 Take for example a most recent event that occurred at home.  2010 was showing on TCM and I casually started watching it as I waited for dinner to be ready.  The film was well over half finished but this is one of those films I can start watching at any point and still enjoy it.  As I watched, my daughter started peppering me with questions about what was going on and I answered them the best I could. It was around this time when my wife joined the conversation.  I was in the process of explaining the meaning of “sequel” to my 6 year old when my wife asked me something along the lines of “This is a sequel?  To what?”  My jaw dropped and I was honestly shocked and flabbergasted at the question.  After asking several more apparently insulting questions, it became clear that she had never seen 2001.  I think my incredulity over this realization slightly angered her but I just couldn’t fathom the idea that she had never seen the film.

It is in these moments when we literally speak a different language.  I make film references constantly and just assume that everyone can follow along.  They can’t of course and I am left trying to communicate without my crutches.  On more than one occasion this has resulted in bad feelings.  I guess I make people feel stupid when they don’t know the inconsequential details of some film that I think they should know.  It is certainly a character flaw of mine.  The point is, however, that even though my wife and I grew up during the same time and in the same culture we don’t share a common cultural experience.  Due to this divide we often misunderstand each other…especially when I throw out some sarcastic reference which my wife doesn’t get.  I wonder if this is a problem for other people.  Certainly it has to be true that many couples have cultural experiences that differ enough to the point that they sometimes can’t understand what the other person is talking about.  I guess it is just one of those weird facts about marriage that one has to understand.

P.S.   I wonder if getting my wife to watch 2001 is really a great idea at this point.  The film isn’t exactly one to make someone enjoy the world of high concept Sci-Fi.  Hell, I am not even sure if I like it even if I do understand its place in film history.  It is something I guess to consider anyway.