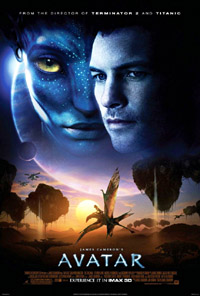 For some insane reason I decided to go to the midnight showing of Avatar.  I did this knowing I had to be at work at 8:00 AM and also being aware of the film’s near 3 hour run time.  I guess I just felt I wanted to be part of the event.  I have a history of doing such things going back to at least Jurassic Park and maybe further.  I think I do this mostly because the crowds at midnight showings of “event” movies are usually better than at standard showings.  You get real fans that are interested in the film and know how to act at the movies.  Plus, I just like seeing movies.  Sadly, I don’t seem to have the stamina for the midnight movie anymore and today I am a bit rundown but in the spirit of getting the word out early I will attempt to write a coherent review of on of the years most talked about films.   Funny…I don’t think the word “film” much applies anymore and the medium is slowly being replaced by technology of the digital age.  That’s beside the point so let’s press on.

Avatar takes place on the alien world Pandora.  Pandora is inhospitable to humans but contains a mineral that humanity seems to need in great supply.  This isn’t really explained in great detail and it really doesn’t matter anyway as the mineral is just the MacGuffin that gets us to Pandora.  Humans, portrayed mostly as invaders, seem to feel they have a right to rape the planet/moon of its resources and proceed to mine the landscape while making token attempts at working with the native population, the Na’Vi.  The humans do, however, have an advanced science team on site which has developed an interesting way of working with the Na’vi.  The team, lead by Dr. Grace Augustine played by Sigourney Weaver, has developed a way to grow Na’Vi bodies, or Avatars, that are genetically tied to a human “pilot”.  The pilots are for all practical purposes Na’vi while linked to the Avatars.  The conflict is set up when paraplegic and former marine Jake Sully becomes part of the Avatar program after his twin brother dies unexpectedly.  Jake is recruited as a pilot because his brother’s Avatar is very expensive and genetically linked to his DNA, which Jake shares an exact copy.  Although Jake comes to Pandora as a soldier he soon finds himself siding with the Na’vi as they fight to protect their homes.

The film is absolutely gorgeous to behold.  Cameron’s 10 year journey to develop the technology to make the film is well worth the effort.  In fact, I feel that this is one film that deserves to not only be seen in 3-D but also on the big screen.  Quite a bit of attention has gone into creating a complete alien world and the only way to experience the artistry of the environment is to see it on a large screen.  The vision for Pandora is large and I don’t feel like it will come across the same way on a small screen at home.  While I have generally been indifferent to the new wave of 3-D films, Avatar deserves the treatment.  It is not used for gimmicks but the effect gives the entire production depth and the effect is never off putting which 3-D often is.  My only criticism is that I still believe the 3-D technology darkens the image too much and I felt Avatar also suffered from the dimming problem.  Overall, however, the effect is quite wonderful.

I can’t say the same about the story.  There is nothing original or exciting in the story.  Avatar cribs from just about all that has come before.  The comparisons to Dances with Wolves is appropriate although even that film was not original.  I saw elements of Dune, Aliens (Cameron recycled the loader from Aliens), Return of the Jedi, and The Matrix.  It can be argued that those properties themselves are just evolutions of older stories but the problem with Avatar is that Cameron didn’t bring anything new to the story.  I found myself not really caring about the characters because I knew from the beginning exactly how the film would play out.  I sat and marveled at the visuals while the story just sort of happened.  In fact, I actually fell asleep early in the film.  That might have been related to the late hour but there also wasn’t anything interesting during the “learning their ways” sequence.  I certainly perked up a bit during the actions sequences later in the film.  If there is one thing Cameron does quite well it is action and his talent is on display here.

I think this is going to be the Achilles heel of the movie.  If you don’t buy the love story, there isn’t much to bring you back for repeat viewings other than just the amazing film making.  Avatar, however, might be one of those films where the story just doesn’t matter because what you are seeing on screen is so much more than just plot.  What Avatar represents is the culmination of a new way to tell stories.  We’ve seen pieces of this come to the screen in the Star Wars prequels and The Lord of the Rings but I feel Avatar takes another step and proves that whole worlds can be convincingly built from imagination and that audiences can be fully immersed in those worlds.  Avatar also proves that 3-D is not only viable but can be used to add to the film going experience.  Ultimately it is the power of that experience that will determine the success of the film regardless of the blandness of the story.

The performances delivered what they needed to deliver to advance the story but no single actor or actress really stood out.  I will note that I actually liked Michelle Rodriguez which is something as I usually find her a bit grating.  Sam Worthington as Jake was fine but again I think that since story wasn’t the focus of the film the actors and their performances were not particularly important although everyone fulfilled their roles nicely.  Giovanni Ribisi stands in for Aliens’ Paul Reiser as the corporate tool and is passable but really never does anything of note.  I wish they would have used him a little more to help the audience understand why the mining operation was so critical and why the company and the character were willing to wipe out an alien population to get it.  Finally, Stephen Lang’s Colonel Quaritch is your typical military commander whose solution to everything is shot first and sort the bodies later.  The film is populated with character types that exist to move the story forward but aren’t memorable in their own right.

At the end of the day what is the verdict?  Avatar is a technical achievement in film.  It is a visual experience that is unmatched.  Cameron has created a world from scratch that is both alien and familiar with a level of detail that can’t be fully enjoyed in a single viewing.  Regretfully, the audacity of Cameron’s film making can not overcome the sheer blandness and unoriginality of the story.  I wanted nothing more than to leave the theater with a great sense of awe akin to what I remember after seeing Star Wars or The Matrix for the first time but I didn’t get that feeling.  I am certainly in awe of the technical achievement but can only shrug my shoulders when thinking about the effectiveness of the story.

Avatar is a film worth seeing.  It is a visual treat that you will remember for some time to come.  It is a launching pad for what I think will be a new wave of great films that take audiences to places we’ve never imagined.  My only hope is that there is something interesting to do once we get there.