I have an affinity for 70s era Sci-Fi films.  It seems like Hollywood took more chances with off the wall stories during that time.  Some real classics came out of the era.  Movies like Star Wars, Close Encounters of the Third Kind, Alien, and A Clockwork Orange along with many more are products of the time.  Along with these well known films others from the 1970’s also come to mind.  Films like Logan’s Run, Westworld, and The Omega Man are also notable films from the period but suffer from effects and production designs that are extremely dated in the modern age of film-making.  Then, of course, are the films that make you go “What the hell did I just see?”  It is one of those films I wish to talk about today. 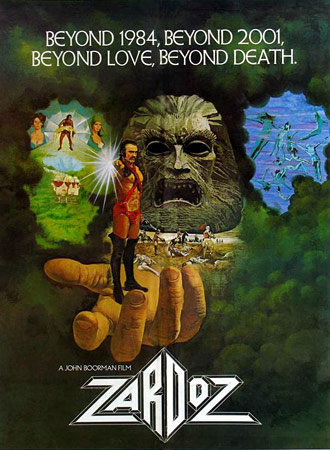 I don’t know where I first heard about ZARDOZ but I have known it was a Sean Connery movie for some time.  His costume from the film is icon and not in a good way.  Over the years I just never picked up the film.  No real reason other than the impression given from the VHS/DVD cover was never great and certainly not enough for me to rent it.  It was just one of those films I knew about but was never inspired enough to see.

At some point in the last few months, however, something put ZARDOZ on my radar.  I don’t know if I read something somewhere about the movie or whether it was suggested by Netflix.  Whatever the series of events was, I became very interested in seeing the film.  It has a few things going for it that I wasn’t aware of.  First, it is a John Boorman film.  For me that is significant because I am a big fan of another of his films, Excalibur.  Also, Boorman directed Deliverance.  Second, I came to find out it was much more Sci-Fi focused than my initial understanding.  For some reason I thought it was more fantasy.  I generally stay aware from 70s era fantasy because the films are generally just awful.  Once I had a better understanding of what to expect, I was sold.  I read the reviews and found that people either loved the film or absolutely hate it.  I enjoy film that inspire such feelings because it usually means there is something worth seeing.  I added the film to my Netflix queue and pushed it to the top.

I got the disk in the mail before Thanksgiving and was looking forward to viewing it during the break but fate was not on my side.  The disk would not play in my laptop and I had to wait until I got home which brings us to Monday night.  I came home from my card game hungry and decided to stay up and watch the film while getting a late dinner.  I generally watch these so called “cult” films alone as I don’t like to inflict an unknown experience on my wife and this situation was no different.  I expected a crazy ride and I was not disappointed.

ZARDOZ is set in the dystopian future of 2293. Civilization has broken down (we are never told what happens) and man exists in two states, the primative Brutals and the immortal “Eternals”. Sean Connery plays Zed, a brutal who has been “chosen” to be an exterminator to control the population of the rest of the Brutals. The Brutals are regularly visited by a floating stone head called ZARDOZ whom they revere as their god. Right about here is where things go bat-shit crazy. ZARDOZ distributes weapons and ammunition to the Exterminators and commands them to go out and kill.  In the words of ZARDOZ:

“Penis is evil! The Penis shoots Seeds, and makes new Life to poison the
Earth with a plague of men, as once it was. But the Gun shoots Death
and purifies the Earth of the filth of Brutals. Go forth, and kill!
Zardoz has spoken.”

You think you will hear lines like that in movies today? Hell no!

Anyway, shortly there after, Connery’s character, Zed, finds a way to enter the stone head and travel to the land of the Eternals.  Here he finds that the world isn’t what it seems or perhaps confirms his growing suspicions.  He is soon captured by the Eternals who want to either kill him, study him, or make love to him.  It’s all kind of confused.  What follows is a trip down the rabbit hole into a commentary on the nature of humanity, religion, and science with a healthy dose of nudity to keep you interested.

Ultimately I enjoyed the film even though I thought it went off the rails in parts.  I have no doubt that an wealth of drugs were involved in the production.  However, at the core of the film there are some really interesting ideas.  One key component of Eternal society is that not only are they immortal but they don’t age expect as a punishment.  If an immortal somehow violates the social contract the all knowing and all powerful Tabernacle can age that person anywhere from days to decades.  When an Eternal is aged far enough they are cast out to live with the other renegades in old age and senility for eternity.  That’s one hell of a punishment if you ask me.  We see Eternal society breaking down in other ways as well.  Some Eternals are so disillusioned by the utter pointlessness that comes with immortality that they basically checkout and enter a near catatonic like state.  The Apathetics are similar to the aged Renegades in that they both want to die but cannot…or are just not allowed.

The film deals with the consequences of immortality fairly competently and makes a subtle statement against the idea of living forever in some kind heaven or utopia.  Boorman, who both wrote and directed the film, suggests that it is our mortality that gives life meaning. Boorman also says something about the unchecked proliferation of science.  Although I think thematically the film is powerful, the ideas often get lost in the craziness of the film itself.

The film is quintessentially 70s from the costume design, to the trippy visuals, to the pointless nudity.  One interesting note though is that watching this film makes one very aware of how different films are cast today.  If this film was remade today there is no way someone like Connery would get the lead.  Today we would get some 20 year old tanned and bronzed wrestler type instead of Connery’s over 40, natural (read “hairy”) physique.  The same thing goes for the women in the film.  This was made before the proliferation of breast implants and cosmetic surgery.  The women in the film are very natural and reflect the waif-like preferences common during the age.  I personally enjoyed the more natural look of the cast and would like to see a return to such aesthetics.

Effects wise the film is dated but not unwatchable.  I am not sure when plastic wrap became indestructible but I guess anything goes in the future.  Also, it seems like global warming is a real threat because in the future no one except the very poor wears a full shirt or pair of pants.  I guess that means ants, bees, and mosquitoes are also no longer a problem.  Mustaches also continue to be frowned on my the upper castes.

I think this film is ripe for a remake.  I think with the right director and some clever writing we could see a modern version of this story that had some real impact.  Sadly I don’t think such a cerebral story can find production money in the blockbuster age.

ZARDOZ is strange journey into the future that could only have come out of the 70s.  It is interesting to see this film along with its thematic brothers A Boy and His Dog, and Logan’s Run together.  I have watch each film over the last few months and I certainly see a pattern.  There was a pre-occupation with societal self-destruction along with a fear of an unknown future that seems to show up again and again in SCI-FI from the era.  It is certainly worth a watch even if there are more than a few “WTF?” moments.