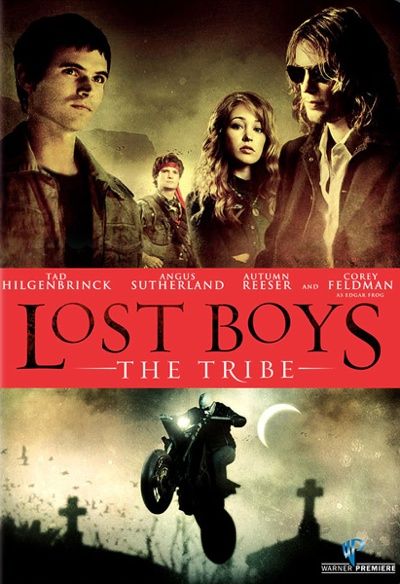 No seriously, cry.  Cry your eyes out.  Crying is about the only thing left to do after watching the utter travesty that is Lost Boys:  The Tribe.  If you didn’t think it could possibly be THAT horrible you were dead wrong.  I don’t know if it is the worst vampire movie ever, I haven’t seen Twilight although I have my suspicions, but it has to be on the list.

I certainly did not expect much when I sat down to watch this “film” but within about 2 minutes into the train wreck I knew without a doubt that I would see nothing but garbage for the next hour and a half.  Even a short cameo by the legendary Tom Savini did not give me any hope that what followed would be anything other than a complete rape of a once fun story.

The The Lost Boys is one of those great 80s horror flicks that is fun if not particularly scary.  It has a very unique visual style and shows off why Joel Schumacher was once a sought after director…long before he put nipples on Batman.  We also get a completely bad-ass Kiefer Sutherland along with a whole group of vampires that don’t fucking sparkle but rather rip throats out of people’s necks.  Yeah, there is also the “Coreys” but this was a time when they were actually fun to watch.  The Lost Boys is one of my favorite vampire flicks and one of the few that I actually own on DVD.

Lost Boys 2 was in development for a long time.  Too long it seems because by the time it finally hit theaters…ooopsss…I mean by the time it went direct to DVD it was a watered down mess that only lightly resembled its much better predecessor.  Oh sure there were plenty of call backs to the original film including a weird saxophone player but these were obviously meant to be jokes and not an extension of the original story.  Oh, and when the lady produced a copy of The Goonies there was no doubt that the filmmakers were taking a piss on the original.  I didn’t need that reference to know that Feldman’s role in the film was just a token part anyway but those little self referential jokes just never come off as anything more than ridiculous in these types of films.

One surprise was that Angus Sutherland played the lead vampire, former surf pro Shane something or other.  Angus is Kiefer’s half brother.  Looks like he got about half the acting talent as well.  He certainly would make a better sparkling vampire than a Lost Boy.  Surfing vampires?  Seriously?  The vampires in this film did not have that dangerously cool vibe like Kiefer and Alex Winter (Yes, of Bill and Ted fame) had in the first film.  No, here the were slope headed frat boys who get their kicks out of sticking knives in each other as pranks.  Kiefer’s vampire David would never make such mouth breathers part of his group and would likely eat them all for lunch. Hell, I don’t even think pretty boy vampire Deacon Frost (you do know Deacon Frost right?)  would hang out with these douchebags.  Oh, and here’s a spoiler for you, the vampire that acts like the head vampire.  Yeah, he is.  No big twists here, that would take actually inventive plotting.  In fact, I think this film may have actually been written by monkeys.

Corey Feldman reprises his role as Edgar Frog but he is obviously there to collect a paycheck.  He does nothing interesting and even regurgitates lines from the original film.  Jamison Newlander (the other half of the Frog Brothers) and Corey Haim are missing but Haim does show up in a short scene during the credits.  Haim was supposed to have a little more of a role but his complete inability to be sober cost him the role.  Maybe it is for the best because really no one should be associated with this film.  Sadly, the credits sequence destroys both the character of Sam and Haim in one swift stroke.  Nevertheless, I would have like to have seen a little more of that confrontation.  It would have been the most interesting thing in the movie.  Apparently Alan Frog does appear in the deleted scenes but since I streamed this over Netflix I didn’t have access to those scenes.  Really though, what could I be missing?

Ultimately what we have is just another piece of evidence that convinces me Hollywood can never recapture lightning in a bottle.  Sure they didn’t really try that hard but The Lost Boys was a film of its time.  Even if that movie was made today with the right director, budget, actors, etc. it would look silly.  It wouldn’t fit in with the culture of the day.  It is the same problem we have when we watch Die Hard 4, Indiana Jones 4, and even the new Star Wars Trilogy, although that group of films has a whole different host of problems.  You just can’t go back to the well.  Especially not when it is done in some half-assed, hackneyed kind of way.

It looks like this film kicks off my October of horror and hopefully it is only up from here.  I’ve got Takishi Miike’s Audition on deck and am really looking forward to that one.  The trailer makes it out to be really twisted and sick.  Right up my alley for a horror film.  I’m not sure how much torture porn I am up for this month but this is one I have been waiting to see.  Other than that I am pretty open so if you have a recommendation, please send it my way.  Halloween is on a Saturday this year so that means I can have a sweet horror marathon after the girls go to bed for the evening.  The only rule I think I am going to follow this year is to only watch films I haven’t seen.  There are plenty these days so it should be a fun month.