That, or maybe if government research goes wrong, or Earth passes through a comet’s tail, or there is a virus breakout…Ok, I guess the dead can walk the Earth for any number of reasons but I think we can all agree zombies are extremely creepy and awesome!

Today’s post concerns some recommendations for those of you that find the Zombie genre enjoyable.  While working on a paper Saturday, Shaun of the Dead, was on in the background. 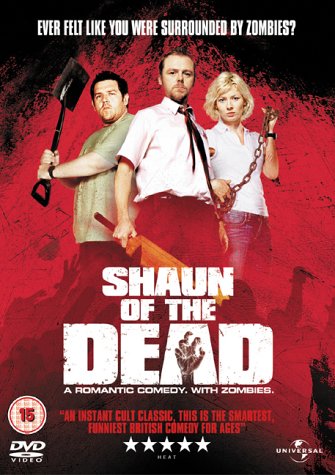 This is not only the best zombie comedy ever made, but it is possibly one of the best comedies ever made. There are great call outs to classic zombie movies. I especially loved the almost throw away line Ed uses when he and Shaun decide to save Shaun’s mom, Barbara. The name Barbara may have some meaning to you old school Night of the Living Dead fans out there.

There is also a nice bit of social commentary underscoring the comedy which again is also very prevalent in good zombie films. Also, there is plenty of British humor, or humour, as it may be spelled back on the island as well as pop culture references, and some minor drug and video game gags. I highly recommend this movie and since I think both Comedy Central and Sci-Fi have run the film recently there is no reason for you to miss it. It’s better uncut, but the cable version isn’t half bad either.  Better yet, make it a double feature and rent Shaun of the Dead and Hot Fuzz together.  You’ll be in for one excellent night of comedy.

(Update – 3/14/12 – If you at all like this film you really need to check out the short lived BBC series “Spaced”.  It’s a Simon Pegg vehicle an Nick Frost as well as many other actors from this film are in the show.  Simon’s character works in a comic book shop so you know there is plenty of geeky goodness.)

My second zombie pick of the week comes from the that often maligned and misunderstood genre…the comic book. 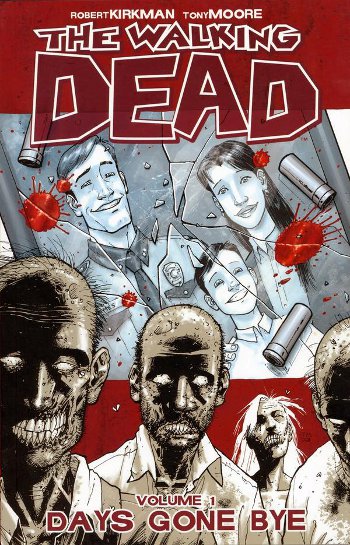 The Walking Dead is author Robert Kirkman’s attempt to follow the living AFTER the zombie apocalypse.  Too often films don’t have time to see what the long term effects of living in constant fear and danger have on the survivors.  I picked up Volume 1 on Sunday after watching Shaun of the Dead on Saturday and I had the book finished in about an hour’s worth of reading time.  Volume 1 sets up the world and the initial characters and although the story is derivate (some would say it is a homage) there are some really great moments.  I am looking forward to getting into the rest of the story.

I will also say that this is the only black and white comic I have ever bought on purpose and that is saying something.  I don’t like black and white books.  This particular book, however, is amazing and I quickly forgot about the lack of blood splatters because of the detail of the art.  I understand the artist, Tony Moore, didn’t do too many issues so it will be interesting to see how the book looks with a different artist.  Again, this is another great piece of storytelling that I highly recommend.  I hope to get caught up soon so I can start buying the monthly series.

On a side note, I was pleasantly surprised to see that the story starts in Cynthiana, Kentucky.  My parents once lived and worked in that city so I feel a special connection to the story.  Kirkman and Moore went to grade school there I believe as well.  If things had been just a little different my dad might have been one of Kirkman’s teachers.

What is great about both of these stories is that they use the zombies to tell human stories and they use zombies correctly if such a thing can be said.  Zombies are slow, but relentless.  They never stop, they never get tired, they never give up.  This puts constant pressure on the survivors and it is how each individual handles that pressure that creates the drama and the humor.  Zombies stories, when they work, tell stories of humans and groups of humans that are being put to the test.  The questions these stories always ask include “Are we better alive than dead?”, “Are we already zombies, but haven’t admitted it yet?”, and “Do we deserve the life we have?”.  Even if you don’t appreciate the horror genre and all the nastiness that goes with it, I think everyone can identify with those themes.

Send more paramedics…and if you know what that means then you know of another fun zombie film.  If not, Google it and let me know what you find.