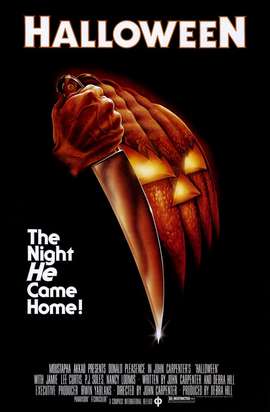 My love of horror movies had its genesis at a very young age. I remember an event that occurred one evening when I was still living in Kentucky that contributed to my fascination with the genre. I could not have been too old, maybe 7 or 8, but definitely younger than 10 (I moved at age 10) and certainly not old enough to watch horror movies. Late one evening, probably in October, a movie came on television. I don’t know if this was on network TV or some cable channel. We may have had HBO at the time, I am not sure, but what I do know is that it was a movie I was not allowed to watch.

The film opened with a shot of a pumpkin that slowly zoomed in on one of the eye holes. The movie was Halloween. As a kid I thought this was great and I was immediately hooked. Of course, this was also the same moment that I was told that I had to go to bed. From just that one opening credit sequence I was determined to see the movie. I knew that if my parents did not want me to see it then it must be good. I don’t remember when I finally got to see the movie, but what matters more is that from that night on I devoured horror. From black and white Universal pictures to schlock shown on the Elvira show to the television anthologies Tales from the Darkside, I watched as much as I could, when I could. My parents didn’t seem to mind most of the stuff shown on network TV so I got a good introduction to the genre in that format.

Sometime later in my early teenage years I was able to rent horror movies. I am not sure if my parents really knew what they were renting for me or not, but by the time I was a young teenager, most of the restrictions on movies had relaxed. This is when I was first exposed to Hellraiser. Even though I did not understand much of the thematic elements at the time, I loved every minute of the film. The sex, the gore, the monsters, all of it lit my young mind on fire and pulled me willingly into the world of the more intense horror films. You just can’t beat seeing a man, a horrible, despicable man, being ripped apart by hooks and chains.

From that film I sought out all the classics. Dawn of the Dead, The Evil Dead, The Texas Chainsaw Massacre, everything I could get my hands on at the video store. Nothing else I watched at the time, however, stuck with me like Hellraiser. Over the years I followed the series and wept as it descended into mediocrity. I also kept up with the outside material, most notably, the comic books. They were a bit more underground than your Superman and Batman books, but were easily found at my favorite shop at the the time, The Comic Strip. Although my collection is still not complete, I got a better understanding of the underlying theme of the story through the books. 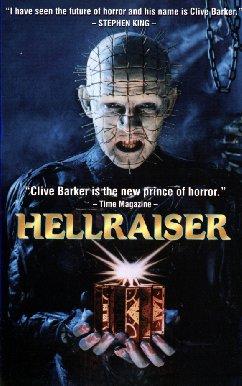 At its heart, Hellraiser and more specifically, the Clive Barker novel, “The Hellbound Heart” is an S&M story. In fact, the original title of the film was to be Sadomasochists from Beyond the Grave. I am still a bit fascinated by the fact that those undertones were able to slip by and get into the mainstream film audience. Maybe this is why the story has always stuck with me. On some level I always knew there was something very taboo about the whole thing. As an outside observer, the darker parts of human nature have always been of interest to me and this story is nothing if not about the underbelly of the human condition. The idea that pain=pleasure was so foreign to me that I had to keep watching. It must be the same urge that drives people to watch stock car races for the crashes. Whatever the reason, the Hellraiser mythology will always be something I have a passing interest in. I know the recent direct to video films have been awful, but don’t let that shy you away from the first two and I also HIGHLY recommend seeking out “The Hellbound Heart” by Clive Barker. It is a short novel that you can read in a few hours.

With that in mind, I deeply regret that I will not be able to go to the Atrox Factory this weekend and meet Pinhead himself, Mr. Doug Bradley. It may be my only real chance, but we have already had a sitter one night this week and trying to get one again is probably out of the question. I really would like the chance to hear him speak about his experiences with the series and I would love to visit Atrox. Another time I guess.
Until then…

“We have such sights to show you!”